America’s premier festival of new cinema from Germany, Austria and Switzerland will light up San Francisco with a strong, diverse program, featuring a stellar array of this year’s hottest luminaries, directors, and actors in person.

The 15th Anniversary Berlin & Beyond Film Festival (October 22-30, 2010) has announced its line-up of 24 feature-length films, six short films, and 17 guest artists. For one week, the festival will take place at San Francisco’s glorious and historic 1,400-seat Castro Theatre from October 22nd through 28th, along with an encore day of screenings at San Jose’s Camera Cinemas 12 on October 30th.

Tickets are now on sale at 10:00am via website at www.berlinbeyond.com. Full Festival Catalog in PDF can be downloaded via website.

The 15th Anniversary Berlin & Beyond Film Festival, a presentation of the Goethe-Institut San Francisco, will take place October 22-28th, 2010 at the glorious and historic 1,400-seat Castro Theatre in San Francisco, along with a new encore day of screenings at Camera Cinemas 12 in downtown San Jose on October 30th.

It has been America’s premier festival of new cinema from Germany, Austria and Switzerland since 1996.

The festival has been serving as a gateway for the American public to experience the diversity, history and progression of the German-speaking countries in Europe. In the last 14 years, over 500 films have been presented to 100,000+ people, along with the memorable presence of hundreds of guest artists. Luminarie, who have graced the festival, included Doris Dörrie, Bruno Ganz, Michael Verhoeven, Wim Wenders, among many. Annually, the festival welcomes 10,000 cineastes and film lovers from near and far to celebrate seasoned masters, up-and-coming new artists, dynamic documentaries, and momentous classic films. Over 30 new and celebrated films will light up the silver screens at this year’s festival. For all details, go to www.berlinbeyond.com or call (415) 263-8760. 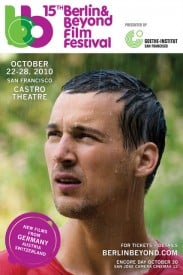