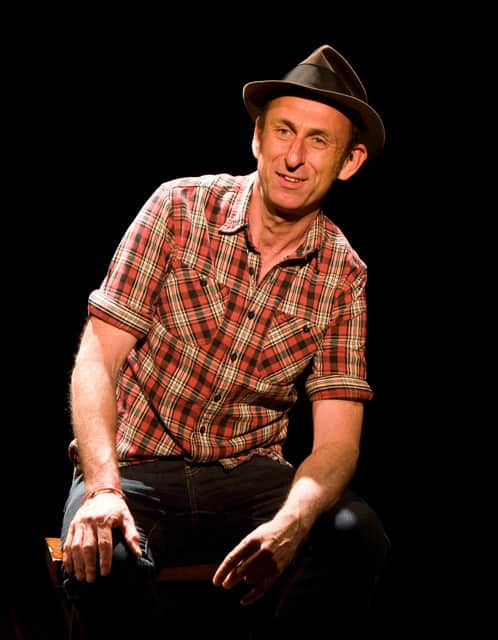 Palomino is a beautifully-realized play written for one actor about the sexual exploits of a hackney driver turned accidental gigolo. David Cale plays a cast of seven different characters, both male and female, to tell the story of Kieren McGrath, a handsome, literate, Central Park carriage driver who dreams of writing a great novel. When he is offered the opportunity to become an escort to a number of lonely, wealthy women in New York City, he believes he has finally found his subject. Or has he? As McGrath shares his sexual conquests and introduces the women he has met, seduced, and profited from, the theme of bartering for love takes on new meaning. Palomino received its World Premiere in 2009 at Kansas City Repertory Theatre after undergoing development at the Sundance Theatre Lab, where Cale was writer-in-residence.

A brilliant writer and actor, Cale is best known for his solo works Somebody Else’s House, Deep in a Dream of You, Smooch Music, The Redthroats, and the OBIE-winning Lillian. As an actor, he recently appeared opposite Ryan Gosling and David Morse in the film The Slaughter Rule, on Broadway in The Threepenny Opera, and most recently Off-Broadway inMouth to Mouth, and will appear with Bernadette Peters in the upcoming film Coming Up Roses. As a writer, Cale’smonologues have been featured on Public Radio’s “This American Life” and NPR’s “The Next Big Thing.” He penned the book, lyrics, and co-composed music for the musical Floyd and Clea Under the Western Sky, which received an Outer Critics Circle Nomination for Outstanding New Off-Broadway Musical; Cale was also featured in the production as a performer. Additionally, Cale was one of the writers for Motherhood Out Loud, which ran at Hartford Stage, and penned scripts for several dances, including the text (and narration) for Chickens, which was choreographed by Charles Moulton and performed by Mikhael Baryshnikov’s White Oak Dance Project. As a lyricist, Cale’s words have been performed by Elvis Costello, Deborah Harry, The Jazz Passengers, Richard Butler of The Psychedelic Furs, performance artist John Kelly, and jazz singer Jimmy Scott, among others. His songs have been featured on the soundtracks of several films, including Robert Altman’s Short Cuts.

SHOWS: Tuesday at 7pm; Wednesday through Saturday at 8pm; Sunday at 2pm and 7pm