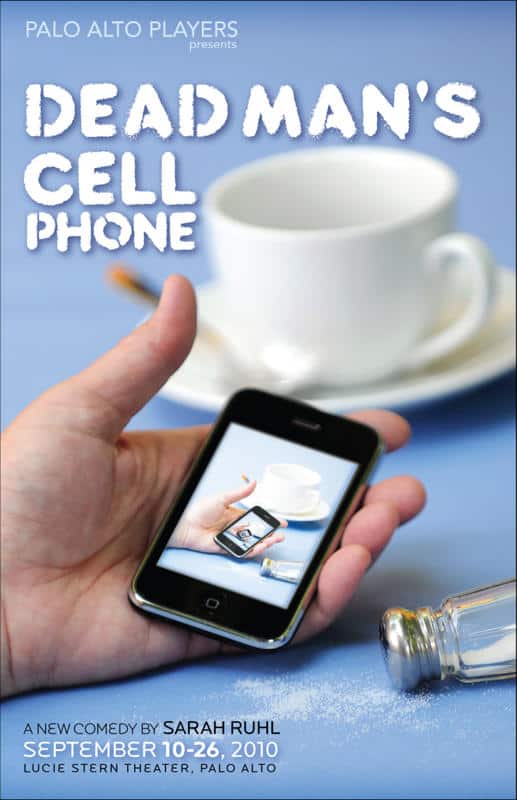 Palo Alto Players begins their 2010-2011 season with a wild new comedy by one of America’s hottest playwrights Sarah Ruhl. Dead Man’s Cell Phone opens September 11, 2010 at the Lucie Stern Theater in Palo Alto, with a paid preview on September 10, 2010 and tickets are now on sale.

In our technologically-obsessed world of staying connected, would you answer a dead guy’s incessantly ringing cell phone at the next table in an otherwise quiet café? In Dead Man’s Cell Phone, Jean does, and soon finds herself dating the dead man’s brother, sharing cosmopolitans with his widow, and rendezvousing with his mistress. Jean’s-never-to-be-imagined odyssey takes her to hell and back—setting the dead man’s bizarre life to rights…and resurrecting her own.

Dead Man’s Cell Phone is just one of the many award–winning plays that Ruhl has written. Her repertoire includes The Clean House which won her the Susan Smith Blackburn Award, a finalist for the Pulitzer Prize, and the Pen Award. Melancholy Play, Eurydice, Late; a cowboy song, Orlando, and Demeter in the City all won her a NAACP Image Award nomination. Dead Man’s Cell Phone awarded her the Helen Hayes Award for Best New Play. Recently, Sarah Ruhl has been awarded the Will Glickman Award for In the Next Room. The award is given out each year to the best new work to hold its world premiere in the San Francisco Bay area. The world premiere production of Dead Man’s Cell Phone was produced in June 2007 by Wolly Mammoth Theatre Company, in Washington D.C. The New York premiere was produced in March 2008 by Playwrights Horizons.

Palo Alto Players’ production of Dead Man’s Cell Phone brings an all-new cast and some amazing local talent to bear on this Helen Hayes Award winning play. Local director Lennon Smith returns to Palo Alto players to take on this hot new comedy! Smith last directed with Palo Alto Players for The Spitfire Grill, Sylvia and Beehive, the Musical. “The challenge,” says Smith “is that she [Ruhl] creates so many quiet moments, that I don’t want the audience to miss a line! Her humor and writing is so perfect, I don’t want any staging to get in her way. I want to keep it interesting without too much dressing, after all Dead Man’s Cell Phone is subtle, brilliant humor at its best!”

The Palo Alto Players cast of Dead Man’s Cell Phone is as follows:

Technical director, production manager, and scenic designer Patrick Klein will be working in cooperation with resident costumer Mary Cravens and props master Pat Tyler to create the physical representation of Edward Hopper’s works, a style that embodies the essence of American realism. Dead Man’s Cell Phone will also feature Matthew Johns in his Palo Alto Players debut as lighting designer, and George Mauro as sound designer. Jeff Grafton is serving as stage manager for the production. The show will also feature the make-up artistry of Kate Ferrant Richbourg with hair and wig design by Rande Harris.

Dead Man’s Cell Phone plays from September 11 through September 26, 2010. There is a paid preview performance on Friday, September 10, 2010. The curtain lifts at 8:00pm Thursday through Saturday and 2:30pm on Sundays. Ticket prices are $21 for the Friday preview performance: $30 for Thursday, Friday and Saturday evenings and Sunday matinees; and $31 for Opening Saturday Gala on September 11. Following the opening night performance, the audience is invited to join the cast and crew for a gala reception with complimentary wine and hors d’oeuvres. Students and seniors receive a $4 discount for Thursday and Sunday performances. Special discounts of 20-25% for groups of 12 or more are also available.