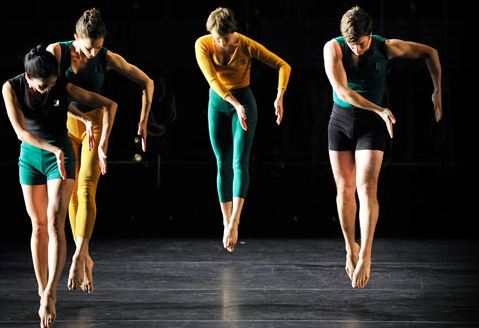 Cal Performances opens its 2010/11 Dance series with a triple bill of West Coast premieres by the distinguished Mark Morris Dance Group (MMDG), when the company makes its annual sojourn to Berkeley on Thursday–Sunday, September 30–October 3. Celebrating three decades of illustrious dance, the company will perform Socrates (2010), set to music by Erik Satie with pianist Colin Fowler and tenor Michael Kelly; Looky (2007) performed to Kyle Gann’s Studies for Disklavier; and Behemoth (1990), Morris’s sole work danced in silence. “In all three works the Mark Morris Dance Group is as remarkable as ever, astonishingly honest and unmannered in delivery” (The New York Times).

“Chaste, noble, beautiful, and Greek as its music” (The New Yorker), Socrates is danced to the 1918 eponymous score by Erik Satie. It is a drama in three parts—“Portrait of Socrates,” “On the Banks of the Ilissus” and “The Death of Socrates”—with lyrics excerpted, respectively, from Plato’s Symposium, Phaedrus, and Phaedo. The role of Socrates is played not by one dancer but by a series of company members with small groups, often quartets and quintets, illustrating a single event. Martin Pakledinaz, who has been designing costumes for the MMDG for 20 years, establishes the ancient Greek setting with brief, flowing tunics; lighting is designed by longtime MMDG designer Michael Chybowski.

The humorous Looky is set in a variety of locations, including a theater, on the prairie, and in an art gallery. It is choreographed to Kyle Gann’s idiosyncratic score Studies for Disklavier (a digitally driven player piano) that draws from animated music, including “Tango da Chiesa,” “Despotic Waltz,” “Bud Ran Back Out,” “Folk Dance for Henry Cowell,” and “Texarkana.” The piece borrows black-and-white costumes from the company’s other works by six designers, including Isaac Mizrahi, Martin Pakledinaz, and Christine van Loon.

The dark and powerful Behemoth was created while the company was in residency in Brussels and is performed on an empty stage in silence, the only work of its kind in the MMDG repertory. “In that rare species, the silent ballet, the steps often feel arbitrary, because there is no music to give them an immediate reason for being. But in Mark Morris’s tremendous Behemoth, the moves seem magical (Financial Times).

“[Mark Morris] has made works that are among the peaks of American dance (and thus world dance) and that have taken dance expression where it has not been before, with visions of human contrast and harmony, comic and bleak at the same time” (The New York Times). Morris was born on August 29, 1956, in Seattle, Washington, where he studied with Verla Flowers and Perry Brunson. In the early years of his career, he performed with the companies of Lar Lubovitch, Hannah Kahn, Laura Dean, Eliot Feld, and the Koleda Balkan Dance Ensemble. He formed the Mark Morris Dance Group in 1980, and has since created more than 120 works for the company. From 1988–1991, he was Director of Dance at the Théâtre Royal de la Monnaie in Brussels, the national opera house of Belgium. Among the many works created during his tenure were three evening-length dances: The Hard Nut; L’Allegro, il Penseroso ed il Moderato; and Dido and Aeneas. In 1990, he founded the White Oak Dance Project with Mikhail Baryshnikov. Morris is also in demand as a ballet choreographer. He has created seven works for the San Francisco Ballet since 1994 and received commissions from American Ballet Theatre, and the Boston Ballet, among others. His work is also in the repertory of Pacific Northwest Ballet, Dutch National Ballet, New Zealand Ballet, Houston Ballet, English National Ballet, the Royal Ballet, and Washington Ballet. Morris is noted for his musicality and has been described as “undeviating in his devotion to music.” He has worked extensively in opera, directing and choreographing productions for The Metropolitan Opera, New York City Opera, English National Opera, and the Royal Opera, Covent Garden. Morris was named a Fellow of the MacArthur Foundation in 1991. He has received 10 honorary doctorates to date. In 2006, Morris received the New York City Department of Cultural Affairs Mayor’s Award for Arts & Culture and a WQXR Gramophone Special Recognition Award. He is the subject of a biography by Joan Acocella (Farrar, Straus & Giroux) and Marlowe & Company published a volume of photographs and critical essays entitled Mark Morris’ L’Allegro, il Penseroso ed il Moderato: A Celebration. Morris is a member of the American Academy of Arts and Sciences and the American Philosophical Society. In 2007, he received the Samuel H. Scripps/American Dance Festival lifetime achievement award.

The Mark Morris Dance Group, celebrating its 30th anniversary, was formed in 1980 and gave its first concert that year in New York City. The company’s touring schedule steadily expanded to include cities both in the United States and in Europe, and in 1986 it made its first national television program for the PBS series Dance in America. In 1988, MMDG was invited to become the national dance company of Belgium, and spent three years in residence at the Théâtre Royal de la Monnaie in Brussels. The company returned to the United States in 1991 as one of the world’s leading dance companies, performing across the country and at major international festivals.

Based in Brooklyn, New York, the company has maintained and strengthened its ties to several cities around the world, most notably its West Coast home Cal Performances in Berkeley and its Midwest home the Krannert Center for the Performing Arts in Urbana, Illinois. MMDG also appears regularly in New York City, Boston and Seattle. MMDG was the first dance company to appear at the Mostly Mozart Festival in 2002 and the Tanglewood Music Festival in 2003 and has since been invited to both festivals annually. The company’s London seasons have garnered two Laurence Olivier Awards (1997 and 2002), and in 1995 the troupe was awarded the Hamada Prize, the Edinburgh Festival’s highest honor.

MMDG is noted for its commitment to live music, a feature of every performance on its full international touring schedule since 1996. MMDG collaborates with leading orchestras, opera companies and musicians such as cellist Yo-Yo Ma in the Emmy Award-winning film Falling Down Stairs (1997); Indian composer Zakir Hussain, Ma and jazz pianist Ethan Iverson in Kolam (2002); The Bad Plus in Violet Cavern (2004); pianists Emanuel Ax and Yoko Nozaki for Mozart Dances (2006); and with English National Opera in Four Saints in Three Acts (2000) and King Arthur (2006), among others.

The Mark Morris Dance Group first came to Cal Performances in 1987, and since 1994 has returned every year. Its visits to Zellerbach Hall often include world premieres: Candleflowerdance (2005); Rock of Ages (2004); All Fours, Something Lies Beyond the Scene, and Kolam (2003); Falling Down Stairs and Rhymes with Silver (1997); and World Power (1995). In 2001, MMDG delivered an encore presentation of Rameau’s comic opera-ballet Platée as well as a preview performance of V. Four Saints in Three Acts had its American debut in 2000; and Purcell’s Dido and Aeneas had its West Coast premiere in 1995. Cal Performances presented the American premiere of King Arthur (2006) and the West Coast premieres of Mozart Dances (2007) and Romeo & Juliet, On Motifs of Shakespeare (2008), the latter of which was set to Prokofiev’s newly discovered original score. Most recently, Berkeley audiences saw the West Coast premieres of Visitation (2009) and Empire Garden (2009).

Members of the Mark Morris Dance Company will be leading an interactive event at Cal Performances’ first Fall Free for All on Sunday, September 26 at 3:00 p.m. at Zellerbach Hall. David Leventhal and John Heginbotham will teach a 45-minute workshop featuring choreography from Looky with participants dancing on stage to the disklavier music.