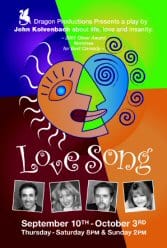 Dragon Productions Theatre announced they will stage John Kolvenbach’s Love Song with performances beginning September 9 in Palo Alto. Nominated for the 2007 Obie Award for Best Comedy, Love Song is an off-beat romantic comedy that provides an examination of who is insane or what defines insanity. The result is an enjoyable fantasy that dances along the perilous edge of whimsy.

John Kolvenbach is an American playwright known for works including Gizmo Love, Love Song, On an average day, Goldfish, and Fabuloso. Kolvenbach’s companion piece to Goldfish, entitled Mrs. Whitney, was presented in repertory with Goldfish at the Magic Theatre in San Francisco in the Fall of 2009. Kolvenbach’s works have been performed all over the world, including productions in Rome, Sydney, Wellington, Seoul, Melbourne, Tel Aviv, and in many theatres in the US. The plays are published by Methuen and the Dramatists Play Service.

Since moving to the Bay Area in 1999, Dragon Productions began as a nomadic theatre company producing 9 shows before we decided that we needed our own home. Thanks to generous sponsors and kind community support, we’ve had great success so far and hope to pick up the momentum in order to provide more quality theatre, events, & classes throughout the year. The talented people who comprise Dragon Productions have this motto: “If you want to do something amazing, you have to make it happen. Don’t wait around for others to give you the opportunity.” In the coming years, we are confident that Dragon Productions will continue to flourish and provide high-quality theatre in the Bay Area.