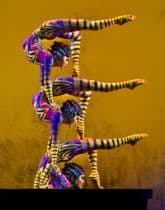 Banana Shpeel is a new style of production from Cirque du Soleil that features a colorful combination of slapstick comedy, eclectic dance and unique acrobatic acts. The action follows a diverse spectrum of performances including tap, hip-hop and eccentric dance, physical comedy and distinctive acrobatic acts performed by elite international artists – plus madcap characters spreading chaos in all directions.

Banana Shpeel writer and director David Shiner started out as a mime in Paris. His career took off in 1984 when he was discovered at the renowned circus festival Cirque de Demain. Shiner later teamed up with Bill Irwin to create the wordless two-man show Fool Moon, which played from 1992 to 1999, including three Broadway runs. Fool Moon picked up numerous prizes, including a Tony Award, Drama Desk Award and an Outer Critics Circle Award. In 2007, Shiner directed his first Cirque du Soleil production, the big top touring show KOOZA.

From a group of 20 street performers at its beginnings in 1984, Cirque du Soleil is a major Quebec-based organization providing high-quality artistic entertainment. The company has 5,000 employees including more than 1,200 artists from close to 50 different countries.Cirque du Soleil has brought wonder and delight to close to 100 million spectators in 300 cities on five continents. In 2010, Cirque du Soleil will present 21 shows simultaneously throughout the world. The International Headquarters are in Montreal.

Banana Shpeel tickets will go on sale to the general public  in September.  Advance online tickets will be available to Cirque Club members prior to the public onsale, with the exact date to be announced online soon. Cirque Club membership is free and benefits includes access to advance tickets, special offers and exclusive behind the scenes information.