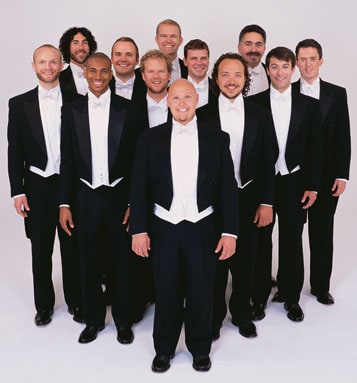 Chanticleer, the renowned 12-member ensemble described by The New Yorker as “the world’s reigning male chorus,” begins the first of eight concerts focusing on music inspired through the ages by the cosmos: Out of This World! Performances begin on September 14 in San Luis Obispo, and run through September 26 with appearances in Carmel, San Francisco, Walnut Creek, Santa Clara, Napa and Sacramento.

Composers have always been fascinated by the seductive power of the sun, the moon, the stars and the planets, and the universe beyond them. Newest explorations for Chanticleer will be from Berkeley-based composer-DJ Mason Bates in a world premiere about transmissions to outer space entitled “Observer in the Magellanic Cloud,” in which the distant past meets the distant future when music by ancient Maoris is picked up in outer space. Also on the program is a new arrangement of “Cells Planets” by Erica Lloyd of Little Grey Girlfriend.

“Space and all that lies beyond our tiny speck in the universe is a concept almost beyond human comprehension, and as with the other great mysteries of the human experience, music is often the only way for our species to express such indescribable concepts,” said Matthew Oltman, Music Director for Chanticleer. “People have long imagined a special harmony in the universe which ties all things together: planet to sun, past to future, life to death. The music carefully chosen for this program will explore these sounds using all that is possible from the human voice — from the splendors of Renaissance polyphony to the other-worldly sounds or over-tone singing to the beeping and whirring of futuristic satellites.”

The ensemble’s second program of the season is the beloved holiday classic A Chanticleer Christmas, which will include the world premiere of celebrated Swedish composer Jan Sandström’s “The Word Became Flesh.” The ensemble will give twelve performances running from December 9 – 23.

The season continues in late March with a musical retelling of the life of Jesus, The Boy Whose Father was God, a deeply moving and provocative biography in music mostly new to Chanticleer’s repertoire. It concludes with Romantic Chanticleer, eight concerts in June, with glorious music by Daniel-Lesur, Strauss, Sviridov, Mahler, Whitacre, Paulus, and more.

Chanticleer was awarded Chorus America’s prestigious Education and Outreach Award for 2010, and recently launched its newest educational program, introducing a small, mixed youth chorus for Bay Area singers aged 14-20 to be known as the Louis A. Botto (LAB) Choir in honor of Louis A Botto, the founder and original Artistic Director of Chanticleer.

Called “America’s favorite choral ensemble,” by the New Yorker magazine, Chanticleer has developed a worldwide reputation for its impeccable musicianship, beauty of sound, and wide-ranging repertoire from Renaissance and Mexican Baroque to jazz, gospel, folk, and adventurous new music.