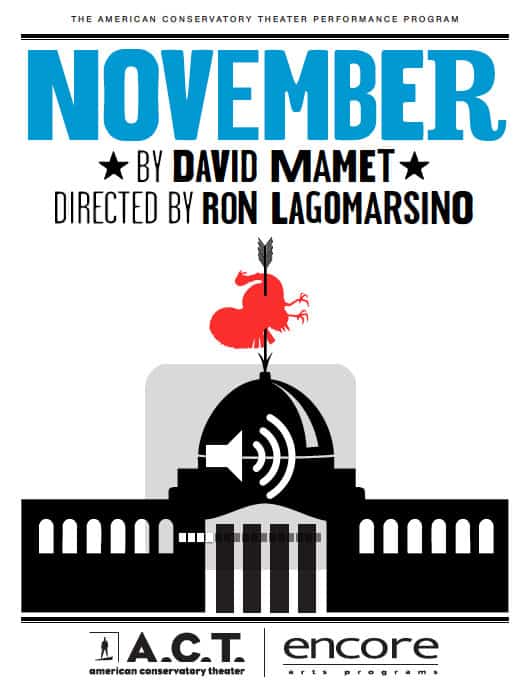 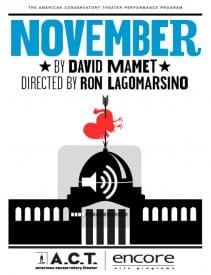 American Conservatory Theater (A.C.T.) in San Francisco today announced that its design department has received national recognition from HOW Design magazine. The A.C.T. 2009–10 season brochure and the poster and signage design for last season’s production of David Mamet’s November were both selected as Merit winners of the acclaimed design magazine’s 2010 In-HOWse Design Awards, which celebrate the work of in-house design departments. Both designs will be featured in HOW Design’s January 2011 issue alongside other winners.

Founded in 1965 by William Ball, A.C.T. opened its first San Francisco season at the Geary Theater in 1967. In the 1970s, A.C.T. solidified its national and international reputation, winning a Tony Award for outstanding theater performance and training in 1979.

During the past three decades, more than 300 A.C.T. productions have been performed to a combined audience of seven million people; today, A.C.T.’s performance, education, and outreach programs annually reach more than 250,000 people in the San Francisco Bay Area. In 1996, A.C.T.’s efforts to develop creative talent for the theater were recognized with the prestigious Jujamcyn Theaters Award.

Today A.C.T. is nationally recognized for its groundbreaking productions of classical works and bold explorations of contemporary playwriting. Since the reopening of the American Conservatory Theater (formerly the Geary) in 1996, A.C.T. has enjoyed a remarkable period of audience expansion and renewed financial stability. The company continues to produce challenging theater in the rich context of symposia, audience discussions, and community interaction.

The conservatory, led by Melissa Smith, now serves 3,000 students every year. It was the first actor training program in the United States not affiliated with a college or university accredited to award a master of fine arts degree. Danny Glover, Annette Bening, Denzel Washington, Benjamin Bratt, and Anika Noni Rose are among the conservatory’s distinguished former students. With its commitment to excellence in actor training and to the relationship between training, performance, and audience, the A.C.T. Master of Fine Arts Program has moved to the forefront of America’s actor training programs, while serving as the creative engine of the company at large.