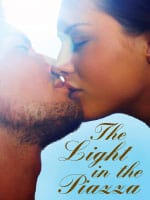 Folks, mark your calendars! TheatreWorks, the nationally acclaimed theatre of Silicon Valley has announced they will present sweeping saga of love beneath the Tuscan sun and epic Tony Award-winning musical The Light in the Piazza, with book by Pulitzer Prize-nominee Craig Lucas and music and lyrics by Adam Guettel, based on the 1960 novella by Elizabeth Spencer.

Set to the soaring melodies of what the Chicago Tribune called “the most beautiful score written for the American musical theater in 20 years,” this breath-taking musical is the poignant tale of two extraordinary young people and the overwhelming power of love.

The year is 1953 and Margaret, a protective American mother is traveling with her radiant but fragile daughter Clara in Florence. As mother and daughter explore the Piazza della Signoria, a serendipitous breeze blows Clara’s hat into the hands of handsome young Florentine, Fabrizio Naccarelli, and the two fall instantly in love. As their passions grow stronger, Margaret must wrestle with her impulse to protect Clara and her desire to see Clara loved and adored in a way that Margaret can only dream of. THE LIGHT IN THE PIAZZA was developed as a musical at the Intiman Playhouse in Seattle in June 2003 and then at the Goodman Theatre in Chicago in early 2004. Named one of the most important musicals of the decade by the New York Times, THE LIGHT IN THE PIAZZA debuted on Broadway in 2005 where it played 504 performances and won six Tony Awards, including Best Original Score, Best Orchestrations, Best Actress for Victoria Clark as Margaret, Best Scenic Design, Best Costume Design, and Best Lighting Design. New York Magazine declared “anyone who cares about the rather uncertain future of this truly American genre should – must – see the show.” Variety called the show “Exquisite,” while the New York Times called it “intensely romantic… simply lovely.”

Craig Lucas (book) is a Tony Award and Pulitzer Prize-nominated American playwright. He made a name for himself when he and celebrated director Norman René collaborated on a new work called Marry Me a Little in 1981, a show that incorporated songs written for but discarded from Stephen Sondheim musicals. Lucas and René went on to work together on several new plays including Missing Persons, Blue Window, the musical Three Postcards, and Reckless, for which he received a Drama Desk nomination. In 1990 they joined forces to create their greatest success, Prelude to a Kiss, for which he received his first Tony nomination as well as a nomination for the Pulitzer Prize for Drama. Lucas has additionally penned two dramas about AIDS, The Singing Forest and The Dying Gaul, which earned him a second nomination for the Pulitzer Prize. In 2003 he collaborated with Adam Guettel to create THE LIGHT IN THE PIAZZA, earning him an additional Tony nomination. Lucas is currently the associate artistic director at Intiman Theater in Seattle.

Adam Guettel (music and lyrics) is a Tony Award-winning composer, a Yale graduate, and the grandson of internationally famed composer Richard Rodgers. His early works include 1996’s Floyd Collins, Love’s Fire, and Saturn Returns. After six years working on the project, THE LIGHT IN THE PIAZZA made its Broadway debut in 2005 and won him Tony Awards for Best Orchestrations and Best Original Score. He spent much of 2005 to 2007 working a musical adaptation of The Princess Bride, but the project was abandoned when contract negotiations soured. In the summer 2007, Guettel composed background music for a production of Uncle Vanya at the Intiman Playhouse in Seattle. In July 2009, the Signature Theatre in Arlington, Virginia commissioned Guettel to write a new musical for its 2011-2012 season, under the auspices of its American Musical Voices Project. Currently in the works, this will be a musical adaptation of the Danny Boyle film Millions. Other current projects include an opera based on the short stories of Washington Irving.

TheatreWorks has assembled an outstanding cast for THE LIGHT IN THE PIAZZA including Broadway veteran Rebecca Eichenberger as the indomitable Margaret and regional ingénue Whitney Bashor as her spirited daughter Clara in their TheatreWorks debuts. Ms. Eichenberger’s Broadway Credits include Carlotta in Phantom of the Opera, Nettie in Carousel, and Susanna and Ruth’s Mother in Dessa Rose (original cast), as well as roles in Cats, The Frogs, A Grand Night for Singing,. She additionally played Mother in the national tour of Ragtime for which she received a Helen Hayes Award nomination. Regional credits include Dot in Sunday in the Park with George at Seattle Repertory Theatre, Carrie in Carousel at Denver Theater Center for which she won a Drama Critics Award, and Laurey in Oklahoma! at LA Opera, as well as roles at George Street Playhouse, Dorothy Chandler Pavilion, and Sacramento Light Opera. Miss Bashor’s credits include Luisa in the Off-Broadway production of The Fantasticks directed by lyricist Tom Jones, Joanie in the first national tour of Happy Days, and Swallow in the national tour of Whistle Down the Wind. Regional credits include Clara in The Light in the Piazza at Philadelphia Theatre Company, as well as roles at the Kennedy Center, Berkeley Repertory Theatre, Sundance Theatre Lab, and Capital Repertory Theatre.

TheatreWorks welcomes Constantine Germanacos in the role of Fabrizio. Seen on New York stages in works including Fanny at City Center Encores! and The Chocolate Soldier at Musicals Tonight!, he has also performed at regional theatres from North Shore Music Theatre to Sacramento Music Circus, performing in Les Miserables, Brigadoon, The Three Musketeers, and The Light in the Piazza. The cast also features Broadway veteran Martin Vidnovic in the role of Signor Nacarelli. Mr. Vidnovic’s Broadway credits include the King in The King and I opposite Sandy Duncan, Sky Masterson in Guys and Dolls, Nick in Baby, Tommy in Brigadoon, and Maurice in the national touring company of Collette starring Diana Rigg. He is joined by fellow New York actress Ariela Morgenstern, who was part of the recent hit production of The Adding Machine at the Minetta Lane Theatre, as well as performing at regional theatres such as the Arena Stage, Center REPertory Company, and others.

TheatreWorks founding Artistic Director Robert Kelley, who helmed the company’s acclaimed production of Caroline, or Change and multi record-breaking World Premiere musical Emma, directs THE LIGHT IN THE PIAZZA. Kelley has earned Bay Area Theatre Critics Circle Awards for TheatreWorks’ productions of Caroline, or Change; Ragtime; Rags; Another Midsummer Night; the West Coast Premiere of Jane Eyre; and the Sondheim classics Sunday in the Park with George; Pacific Overtures; Into the Woods; and Sweeney Todd. Additionally, he is the recipient of Bay Area Drama-Logue Awards for his direction of Pacific Overtures, Ah, Wilderness!, and Once in a Lifetime; and Back Stage West Garland Awards for his direction of Side Show and Sunday in the Park with George. Since founding TheatreWorks in 1970, Kelley has directed over 150 productions for the company.

With over 8,000 subscribers and 100,000 patrons per year, TheatreWorks has captured a national reputation for artistic innovation and integrity, often presenting Bay Area theatregoers with their first look at acclaimed musicals, comedies, and dramas, directed by award-winning local and guest directors, and performed by professional actors cast from across the country.