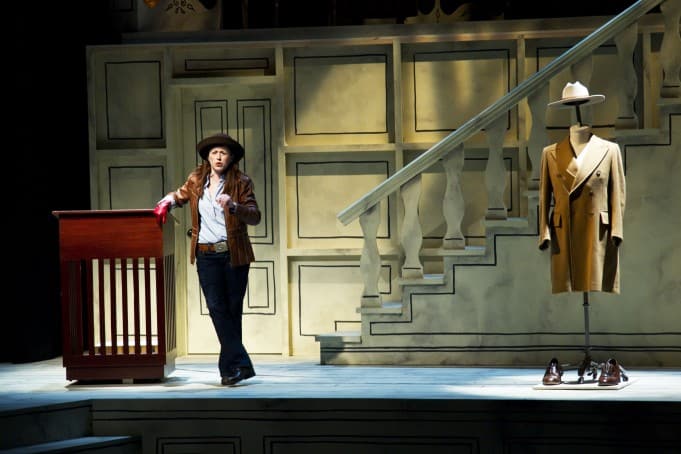 TheatreWorks continues its award-winning tradition of producing new works with the world premiere of Auctioning the Ainsleys.  This unique play launches TheatreWorks’ 41st season and was the winner of last year’s TheatreWorks New Works Festival. This annual event showcases new projects and is one of the reasons that TheatreWorks has gained well deserved national attention for innovation and originality.

Auctioning the Ainsleys is a nutty story about a family of auctioneers and the objects that they surround themselves with.  This unusual tale makes us think about how we value our lives and the significance that we place on the things that we possess.

The story centers on the ailing family matriarch Alice (Diane Dorsey). When her life becomes short, she hires an assistant Arthur (Lance Gardener) to take stock of her possessions and chronicle her memories before they totally slip away. Dorsey is terrific as Alice. She brings incredible stability and sensitivity into this tale of family dysfunction and misplaced affections.  Alice is surrounded by keepsakes from her past. Each represents a significant event and important memory. As Alice’s health and mind begin to fade, so do her treasured keepsakes. When her fragile memory goes the objects actually disappear from the set.  Alice lives with her younger children in a vast Victorian home that is also the family auction house. HIgh drama unfurls when Alice decides to place the home on the auction block and take emotional inventory of the family possessions.

Daughter Annalee (Molly Anne Coogan), is an obsessive compulsive organizer who can’t let go of her control over the items that come and go off the auction block. She is the funniest of the 4 siblings and brings a significant amount of comic relief to the production. Coogan is excellent in this role.

Siblings Amelia (Jessica Lynn Carroll) and Aiden (Liam Vincent) carry on the family’s bent for eccentricity with characters who are more comfortable surrounded by objects (or lack of them) than people. Vincent, the family restorer,  is especially funny when he lacks words to express the endless frustration with his life and reverts to comical gestures. Oldest daughter Avery (Heidi Kettenring) absent from the home for many years returns to notch up the storyline as she begins the process to auction the family out of their home. Kettenring rises to the occasion with the most challenging role of the evening. As the elder child and the victim of her father’s abuse, she manages her tongue twisting auctioneer’s speedy patter deftly and dominates the stage whenever she is present. 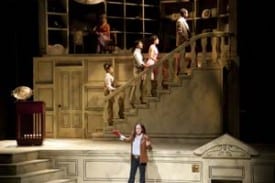 Laura Schellhardt is a young playwright with an incredible portfolio. Her other works include amongst others, How to Remove Blood from a Carpet, The K of D and Air Guitar High.  Her dialogue is as fast and crisp as an auctioneer’s chatter.

The characters are very engaging and compelling. Although the basic concept of the story lacks significant heft, Schellhardt has written a delightful play. Kudos to Annie Smart’s staging which is the star of the night. The set rotates from scene to scene effortlessly bringing great visual interest and virtual space to the production. Her vintage costumes are delightful.

Auctioning the Ainsleys is an absurd, charming, funny production about people, objects, family and what happens to all of them when one’s memory is Going… Going… GONE!