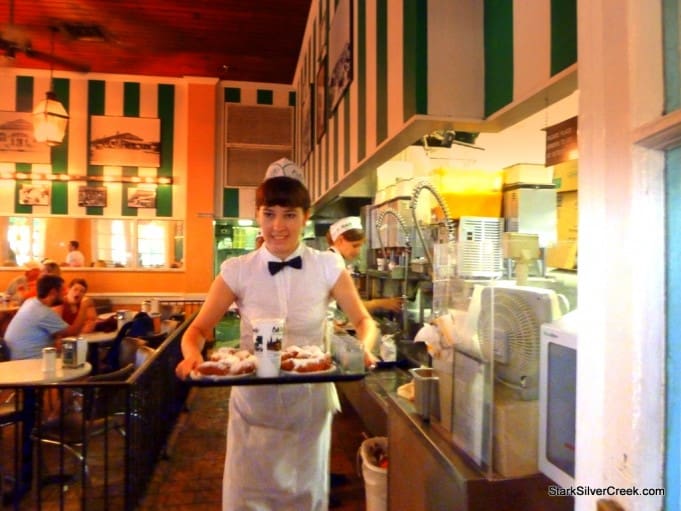 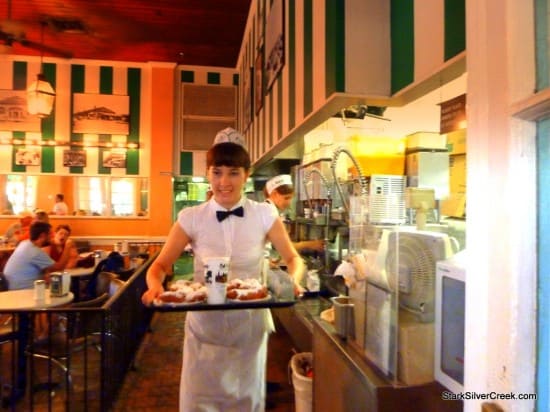 It’s hard to utter the words, “New Orleans” without conjuring up visions of Café du Monde’s Beignets. Accompanied by a hot cup of café au lait and you will be enjoying a timeless classic established since the original Café du Monde stand first opened in 1862 in the New Orleans French Market.

What is a Beignet? Some describe them as a “French-style doughnuts” because they are deep-fried dough. However, unlike most donuts they are square, very puffy and light. They are also not as sweet. This characteristic is more than compensated by the mountain of powder sugar which is served on top. Ultimately, like any food, words do not do it justice. You must try a Beignet to know a Beignet.

The menu at this traditional coffee shop has not changed much since it first started. Dark roasted coffee served Black or Au Lait (half black, half hot milk) and orders of their famous Beignets are still the delicacies most seen dressing up the small round tables scattered in the large outside eating area.

A large white and green striped canopy fends of the hot sun, but does little to keep the summer humidity away. For that, guests can sit indoors where the air conditioning is blasting or partake in Iced Coffee or soft drinks which were introduced in 1988.

The last time I savored a Beignet was pre-Katrina and BP oil spill. I had flown into “The Big Easy” as a speaker for a technology conference.

This time around, I wasn’t sure what to expect when I landed in New Orleans. I had read reports of both disasters on the news, but know well enough that much is lost in translation between media coverage and actually being on the ground. Folks I chatted with at the airport and on the plane noted that the heart of New Orleans, where I would be going, is restored to pretty much the way it has always been. One woman that lives in a town outside of New Orleans noted the latest BP oil spill has really impacted surrounding smaller towns and villages in Louisiana which are along the coast and had depended on the fishing for economic survival.

When I landed, I marveled how everything in New Orleans was just as I remembered it…especially Bourbon Street…and of course, the Beignets. A fresh order of 3 Beignets will set you back $2.14. I ordered a small café au lait and split 2 orders of Beignet among three of us.

The Beignets arrive piping hot and fresh. The outside has a nice crispness to it and the inside is soft, moist and chewy. My favorite part of the Beignet are the four corners of the square. I enjoy cautiously balancing some powder sugar on them as I attempt to avoid any accidents transporting the sweet doughy goodness to my perked up taste buds. I am reminded of how difficult such a task is by the floor of the cafe which is covered in a thin layer of white powdered sugar from all the previous failed attempts. The small white plates which are barely large enough to contain the three Beignet do not help.

I had to pair these Beignets with a hot cup of café au lait even though the weather was hot and humid. My companions, which plenty more common sense, order the iced coffee which they really enjoy and would decide to swing by Cafe du Monde for it before parting on a plane the next day.

As I relish my Beignets, I watch the world go by. Sure, I can make these at home, but for the complete experience, you must devour them while surrounded by New Orleans and the Café du Monde.