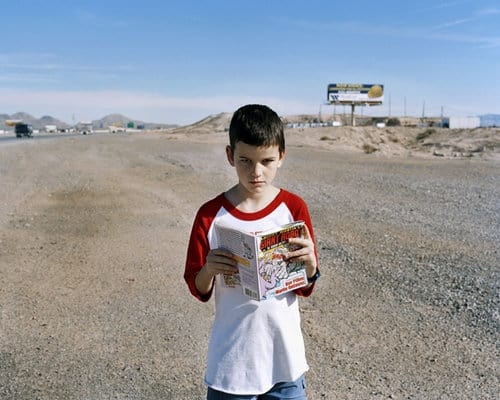 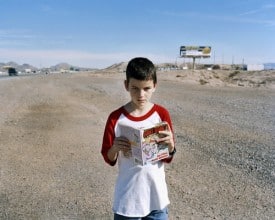 The San Jose Museum of art will showcase its growing collection of contemporary photography in an exhibition on view July 22, 2010, through March 14, 2011. Degrees of Separation: Contemporary Photography from the Permanent Collection will include several new acquisitions seen at the Museum for the first time: Melissa & Lake, Durham, North Carolina (1998) by Catherine Opie; works from the series “Midway: Message from the Gyre” (2009) by Chris Jordan; and Self-Portrait: Portrait of My Father, Manuel Fernandez (2006) by Carlee Fernandez. In addition to these recent gifts from the Lipman Family Foundation, the exhibition includes photographs by Anthony Aziz, Rebeca Bollinger, Laurie Long, Sebastião Salgado, Amy Stein, Larry Sultan, and Katherine Westerhout. Degrees of Separation presents works by contemporary photographers who explore interpersonal relationships or the fundamental relationship between humankind and the natural world.

“Some of these artists zero in on the bonds between parents and children, prospective mates, and lovers,” said JoAnne Northrup, chief curator at the San Jose Museum of Art. “Others trace the impact of consumer desire on the inhabitants of the natural world, or highlight the indelible footprint of industrialization on the landscape.”

Opie’s Melissa & Lake, Durham, North Carolina (1998) belongs to the artist’s “Domestic” series. Opie created this series of portraits of domestic partners at home while on a cross-country road trip. Born in Sandusky, OH, and based in Los Angeles, Opie has described herself as a “kind of twisted social documentary photographer.”

Chris Jordan’s photographs, taken on Midway Atoll in the north Pacific Ocean, draw in the viewer with intricate details and colors. Closer inspection reveals the carcasses of albatross chicks that died from mistakenly eating plastic. As the birds’ bodies decay and disappear, the lighters, bottle caps, and other non-biodegradable plastic things that it ingested remain to litter the earth.

Carlee Fernandez investigates self-portraiture, identity, and gender by photographing herself posing as men that are influential to her. Her Self-Portrait: Portrait of My Father, Manuel Fernandez (2006) is a diptych in which she juxtaposes a family photograph of her father at age 19 with her photograph of herself disguised as her father.

Larry Sultan also plays with the lapse of time in his series “Pictures from Home.” Sultan contrasts his photographs of his retired parents in their suburban American home with old snapshots of them as a young couple. Also on view is the large-scale digital print Aquarium, Belle Isle I (2007), by Katherine Westerhout, which typifies her interest in the grandeur of abandoned architecture and its storied past. Eight works by Sebastião Salgado (taken in Brazil, Ethiopia, Chad, Mexico, Rwanda, India, and elsewhere) document the artist’s investigation into the social impact of large-scale manual labor.