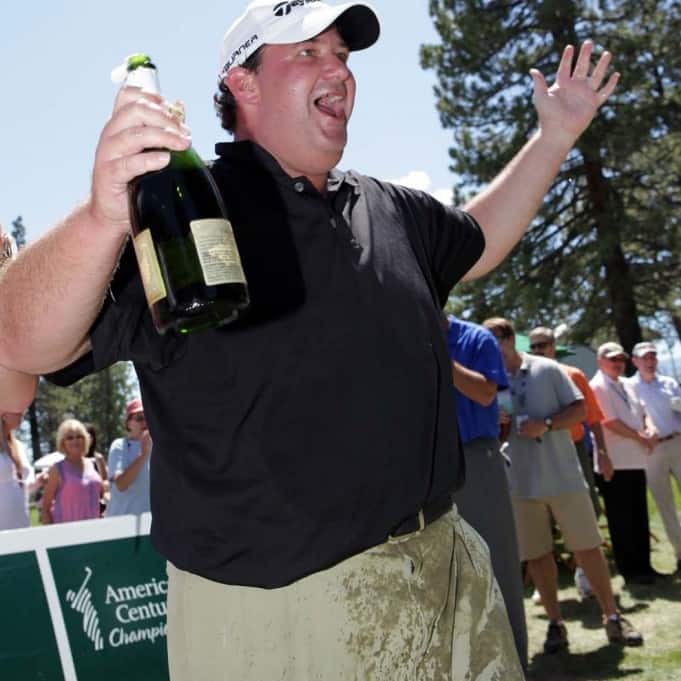 During the American Century Celebrity Golf Championship– often referred to as the Super Bowl of celebrity events, many players took the opportunity to show off their locker-room celebratory skills in the third annual “Korbel Celebrity Spray-Off.”

Participating players included winner Brian Baumgartner, runner-up Mark Mulder, and third place finisher Mark Rypien among more than 40 other celebrity participants. The competition was based on cork distance (but style and champagne spray added to the excitement for the fans).

Actor Brian Baumgartner, the somewhat grating office worker with the slow speaking manner on “The Office” took the title of “Spray-Off Champion” when his cork soared past the corks of sports all-stars to champion a 75ft blast.

Among crowd favorites were Michael Jordan with his signature cigar in hand, Bret Saberhagan who drenched the crowd, Jim McMahon playing in his bare feet, Trent Dilfer who put on his rally cap for extra style points, Jack Wagner who demonstrated some unique dance moves and Vinny Testaverde who was determined not to let the rookie athletes show him up.

Hockey players Brett Hull, Mike Eruzione, and Jeremy Roenick seemed to have an advantage as they showed they had some serious champagne-spraying know-how as their sprays had the most flair and style (likely learned from years of practice winning championships).

“We are thrilled to again be a part of such a great event with the American Century Golf Championship,” said Gary Heck, owner and president of Korbel Champagne Cellars. “Korbel is the perfect celebratory beverage, and it was great to have some fun with it during the third annual “Spray-off” event.”