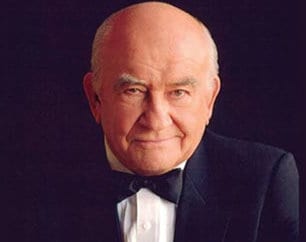 The San Jose Rep today announced that seven Emmy and five Golden Globe award-winning actor, Ed Asner, will speak at the Rotary Club of San Jose luncheon, July 14th. His speech, entitled “Life and Times of Ed Asner,” will reflect his talent both on stage and on-screen, as well as his political and social activism. Asner’s appearance at Rotary San Jose is in conjunction with his one-man show FDR, on stage at San Jose Repertory Theatre, July 14th through the 18th.

Ed Asner will star in Dore Schary’s FDR at the San Jose Repertory Theatre. FDR explores the life of one of America’s best-loved presidents and the events and decisions that shaped a nation. This powerful play follows the iconic president as he reflects on his years in office, from inauguration to the trials of World War II. FDR features a bravura performance by Asner as “that man in the White House,” scorned by many and admired by most. Travel along with one of America’s most cherished actors as he takes you on a captivating journey through FDR’s White House years from the depths of the Great Depression through the resident fabled “fireside chats,” Pearl Harbor and World War II.

Edward Asner, born November 15, 1929, is an American film, television, stage, and voice actor and former president of the Screen Actors Guild, primarily known for his role as Lou Grant on The Mary Tyler Moore Show and its spin-off series, Lou Grant. More recently, he provided the voice of Carl Fredricksen in Pixar’s award-winning animated film, Up.

Asner is best best known for his character Lou Grant, who was first introduced on the The Mary Tyler Moore Show in 1970. In 1977, after the end of the Mary Tyler Moore show, Asner’s character was given his own show, Lou Grant, which ran from 1977-1982. In contrast to the Mary Tyler Moore show, which was a thirty minute comedy, the Lou Grant show was an hour long award-winning drama about journalism. (For his role as Grant, Asner is the only actor to win the Emmy award for a sitcom and a drama for the same role.) Other TV series starring Asner in regular roles include Thunder Alley, The Bronx Zoo, and Studio 60 on the Sunset Strip.

The Rotary Club of San Jose is the most active and well-known service organization in the community. This global organization has over 1,200,000 members in 200 countries.