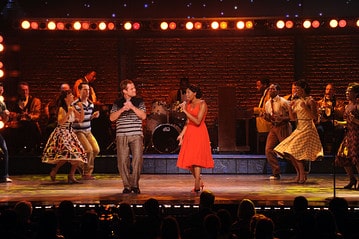 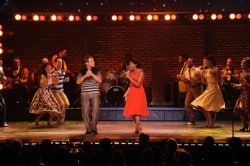 Memphis won the Tony for best musical Sunday night at the annual award ceremony. The musical edged out the white hot production, American Idiot, based on the smash-hit Green Day album of the same name, which still managed to win two Tonys, for lighting and set design. Green Day performed Holiday and Know Your Enemy, with front-man Billie Joe Armstrong boisterously kicking things of with “Hi, New York City!”

Scarlett Johansson won best featured actress for her role in Arthur Miller’s “View From the Bridge.”

“I don’t know what to say,” she said. “Ever since I was a little girl, I wanted to be on Broadway. Here I am. Unbelievable.”

According to Bloomberg Businessweek, 39 shows opened last season on Broadway, from May 2009 to May 2010. They collectively grossed $1 billion, about the same as the year earlier. The average ticket sold for $85.78, up from $67 five years ago, thanks to “premium seats” that retail for as much as $350.