Loni just got back from the San Jose Rep Theatre and here is a sneak peek at some of the craziness that happened. If you’re going to the show this weekend, this should get you in the rockin’ spirit – with a slight dose of girl-group power to spare! 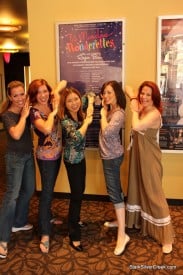 Follow the Wonderettes – Betty Jean, Cindy Lou, Missy and Suzy, four girls with hopes and dreams as big as their crinoline skirts and voices to match – from their 1958 Springfield High School prom to their ten year reunion! These girls tell us about their lives and loves as they perform beautifully arranged high-octane and soulful renditions of pop favorites from the 50’s and 60’s.

These memorable songs include “Mr. Sandman,” “Dream Lover,” “Stupid Cupid,” “Lipstick on Your Collar,” “It’s In His Kiss,” “Son Of A Preacher Man,” and “RESPECT.” This fun-filled, high energy off-Broadway hit is a must-take musical trip down memory lane! Run time: 2 hours and 4 minutes with one 20 minute intermission.

Holly Davis (Betty Jean) is thrilled to be the Lady in Jade for this MARVELOUS production! Regionally, Ms. Davis has appeared in The Marvelous Wonderettes (Detroit’s Gem Theatre), The Three Musketeers (North Shore Music Theatre), I Love You, You’re Perfect…Now Change (Cincinnati Playhouse in the Park), as well as Godspell and The Full Monty (Papermill Playhouse). She was also seen in the national tours of South Pacific (Nellie Forbush) and The Sound of Music (Maria, understudy), and will be joining the national tour of 9 to 5 in September. Ms. Davis is a graduate of New York University’s TISCH School of the Arts. She would like to thank her amazing, gorgeous, talented, brilliant husband, Steve.

Christina DeCicco (Cindy Lou) was most recently seen as Cindy Lou in the final cast of the off-Broadway production of The Marvelous Wonderettes. She has also been seen as Glinda in the National Tour of Wicked. Other roles include Elmire in Molière’s Tartuffe, Éponine in Les Misérables, Maria in West Side Story, Hope in Urinetown, Belle in Disney’s Beauty and the Beast, and Annie Oakley in Annie Get Your Gun. Ms. DeCicco received her B.A. from Wagner College and is a proud member of Actors’ Equity Association. More information: christinadecicco.com. Thanks to Talent House! Love to my family and Anthony.

Bets Malone (Suzy) is thrilled to visit San Jose as a Wonderette. She originated the role of Suzy, not only in the first workshop of The Marvelous Wonderettes, but traveled with it to a successful New York production and an Original Cast Album. Ms. Malone has appeared in four of Roger Bean’s original musicals, as well as having just choreographed his Route 66 for the Milwaukee Repertory Theater. Her regional credits include Natalie in All Shook Up, Adelaide in Guys and Dolls, Annie in Annie Get Your Gun, Eva in Evita, Princess Winnifred in Once Upon a Mattress, Polly in Crazy for You, Sally in Me and My Girl, and Hildy in On the Town, among others. Ms. Malone can also be seen on the DVD The Ten Commandments: The Musical, starring Val Kilmer, and heard as Tallulah the monkey in Barbie as The Island Princess, also on DVD. For more information: www.betsmalone.com.

Lowe Taylor (Missy) is thrilled to make her San Jose Rep debut. Ms. Taylor recently returned from New York where she played the role of Suzy Simpson in The Marvelous Wonderettes off-Broadway. In fact, Ms. Taylor has a long history with The Marvelous Wonderettes, having played the role of Missy at Musical Theatre West and Suzy at The Laguna Playhouse; and as standby for The Wonderettes, she became the first actress to perform all four roles! Ms. Taylor’s regional appearances include Audrey in Little Shop of Horrors; Penny in Divorce! The Musical; Dot/Marie in Sunday In The Park With George; Baker’s Wife in Into The Woods; Babe Williams in The Pajama Game; and Princess Winnifred in Once Upon A Mattress. Ms. Taylor is a proud member of Screen Actors Guild, Actors’ Equity Association and the Musical Theatre Guild. More information at www.lowetaylor.com. To Adam, you are my heart, I love you.