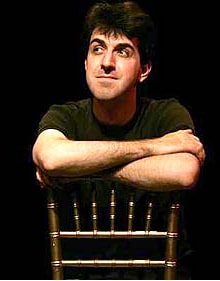 Broadway By the Bay announced today it will hold a performance next month featuring Jason Robert Brown, a Tony-Award winning lyricist and composer, The concert will be held at the Bayside Performing Arts Center and feature songs from several of Brown’s hit shows, including Parade, The Last Five Years, Songs for a New World and 13, and from his first solo album, Wearing Someone Else’s Clothes as well as offering a sneak peak at his highly anticipated new musical, Honeymoon in Vegas. Proceeds from the concert will benefit Broadway By the Bay’s Youth Theatre Conservatory (YTC) – a program that gives students (ages 4-18) solid foundations in acting, singing and dancing for the musical theatre.

Hailed as “one of Broadway’s smartest and most sophisticated songwriters since Stephen Sondheim” by The Philadelphia Inquirer, Jason Robert Brown is the composer and lyricist of the musical, The Last Five Years, which was cited as one of Time Magazine’s “10 Best of 2001” and won Drama Desk Awards for Best Music and Best Lyrics. Jason won a 1999 Tony Award for his score to Parade, written with Alfred Uhry and directed by Harold Prince, which premiered at Lincoln Center Theatre in December 1998, and subsequently won both the Drama Desk and New York Drama Critics’ Circle Awards for Best New Musical. was also presented on a national tour in 2000, which Jason conducted. Jason’s first musical, ParadeSongs for a New World, a theatrical song cycle directed by Daisy Prince, played Off-Broadway at the WPA Theatre in the fall of 1995, and has since been seen in more than two hundred productions around the world. Jason’s newest musical, 13, written with Dan Elish and directed by Todd Graff, premiered in 2007 to rave reviews at Los Angeles’s Mark Taper Forum, and opened on Broadway in the spring of 2008. Jason’s songs, including the cabaret standard “Stars and the Moon,” have been performed and recorded by Audra McDonald, Betty Buckley, Karen Akers, Renée Fleming, Philip Quast, Jon Hendricks and many others.