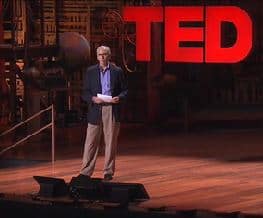 Philip K. Howard, a leading legal reform advocate who recently spoke at TED, spent some time with Stark Insider to explain why he thinks the legal system in the US is too complex and undermines our freedoms. In his TED speech, Philip proposes four ways in which to fix the broken legal system.

We were able to discuss in greater detail the concepts from his TED speech, his leadership of the Common Good organization which he founded and his latest book, Life Without Lawyers: Restoring Responsibility in America.

In his TED speech he notes that, “Law is supposed to support our freedom, not undermine it. Somehow over the last few decades the land of the free has become a legal minefield. Hardly any social interaction is immune from legal implications. A pediatrician told me matter-of-factly, ‘I don’t deal with patients the same way anymore. You wouldn’t want to say something off-the-cuff that might be used against you.’ My own law firm has questions we’re not allowed to ask interviewees, including such suspect questions as ‘Where do you come from?’ In the land of the First Amendment, spontaneity can land you in a lawsuit.”

In the interview, like in his speech and books, Philip points to anecdotes of where common sense is suspended from fear of being subjected to an overly complex legal system to the detriment of an outcome that is better for our health system, our education system and communities. He also reinforces the costs borne by society from legal fees and the risk adverse actions taken in order to prevent entanglement with the legal system, such as teachers who are not able to restore order in a classroom in fear of legal actions taken against the school.

Over the years, more laws have come into place and there has been little incentive to retire laws that are no longer relevant.

“People have this sense when they wake up in the morning, go out on the sidewalk: it’s a state of legal anarchy.”

Philip looks to lead reform, to change legal processes, and to fix the legal system. Similar to Thaler and Sunstein’s ideas in their book “Nudge”, he also takes issue with the current medical malpractice laws and cites a large portion of the costs in our health care system to the insurance that physicians need to take in order to cover themselves from medical malpractice.

His organization, the Common Good, is a nonprofit legal reform coalition that is championing solutions to legal gridlock. One such solution is the idea of a Health Court whose idea received support with President Obama proposed allocating $50 million to states to pilot medical liability alternatives – including special health courts. The health courts proposal was developed jointly by Common Good and the Harvard School of Public Health as an alternative to the current medical liability system. 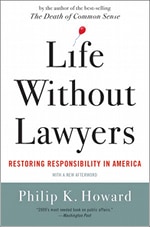 Philip has also visited the San Francisco Bay Area to speak at places such as Google. His organization is reaching out through both traditional and social media to grow the awareness and participation in the problem and the solutions to simplify the US legal system.