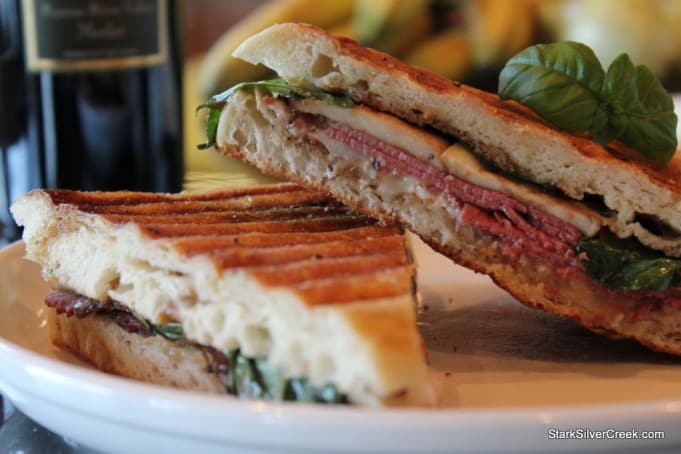 Ever since I toured Rome, I’ve been obsessed with panini. Strange how in a city with such majestic structures and history, it is the simple panini which I found myself craving days and months after I left.

One particular panini I remembered spotting behind a glass enclosure. When the owner handed it to me after its visit to the panini press, I could feel the warmth of it through the white wax paper. I slowly undressed it, starving from a morning of scurrying around the city, and took a bite. The warm cheese, saltiness of the thinly sliced prosciutto and the fresh herbs left me breathless. I tried to pace myself and savor each bite. When I had devoured one half the the panini, I purposefully wrapped up the other half so I could enjoy the experience again. This was also the other aspect I loved about paninis, they were just as good later on in the day.

For the flavored oil mixture combine the following in a small bowl:

Place the press on one gas element and the pan on another. Turn both to medium heat and let the grill preheat as you assemble the panini.

This recipe really shows off the character of the king trumpet mushroom, adding to the juicy meatiness of this pastrami sandwich that will make it quite the distraction. It is the perfect panini to enjoy while busy playing a game of cards or running around Rome.

However, beware as this panini may become the center of attention. Yet a distraction this delectable must be most welcomed, no?