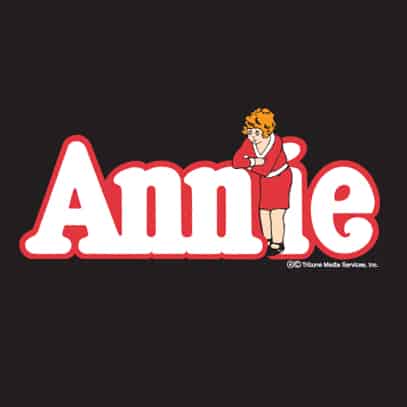 Broadway by the Bay (BBBay) continues its 45th season with a production of the classic Broadway musical Annie at the San Mateo Performing Arts Center. Based upon the popular Tribune Media Service comic strip, Little Orphan Annie, Annie, the much loved family classic, is the timeless tale of an orphan who goes from the squalor of an orphanage – run by the nasty Miss Hannigan – to the polished mansion of multibillionaire Oliver Warbucks in search of her birth parents.

With music by Charles Strouse, lyrics by Martin Charnin and the book by Thomas Meehan, Annie boasts one of Broadway’s most memorable scores, including “It’s the Hard-Knock Life,” “Easy Street,” “N.Y.C.” and the ever optimistic “Tomorrow,” the original Broadway production of Annie won seven 1977 Tony Awards, including Best Musical, Best Book and Best Score, and is one of the top 20 longest running shows in Broadway history.

Broadway By the Bay, now celebrating its 45th Anniversary, is the largest theatre company on the Peninsula. Producing three full-scale musicals and one intimate snapshot of the best of Broadway each season, the Company has won numerous awards, including over 40 Theatre Critics Circle Awards, and has garnered acclaim throughout the San Francisco Bay Area as a destination for professional-quality musical theatre.