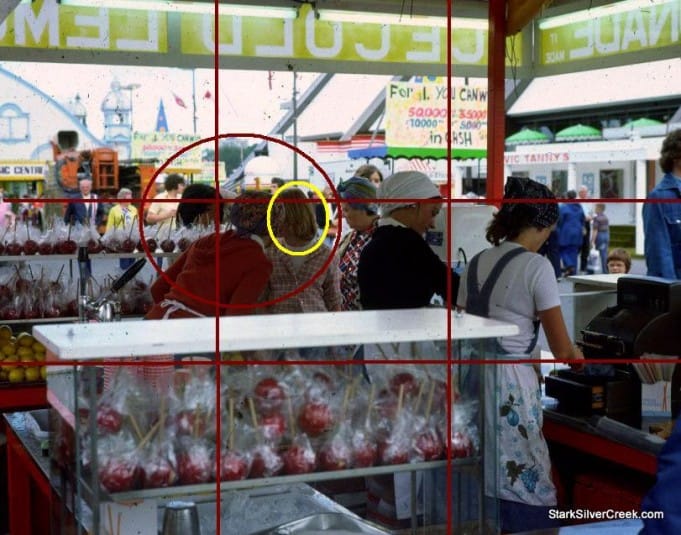 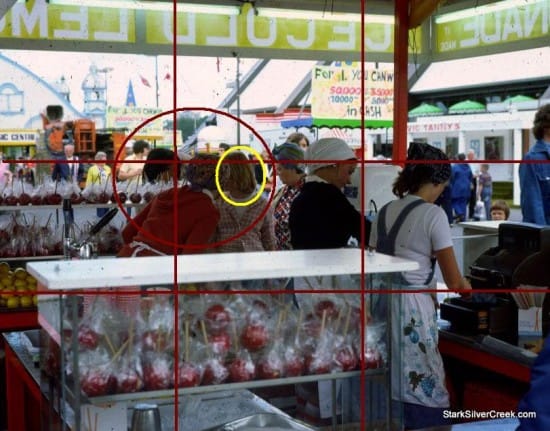 For my sixth oil painting, I’ve decided I would spend some time thinking about composition and engagement.

When I first selected this photo, which was taken in 1975 at the Ex in Ottawa, Canada, I chose it because I loved the bright colors of the candy apples and lemons. Also, after visiting many art galleries in Paris, I realized most master paintings included people so I decided I should try to tackle people as a main component of this painting.

Because the canvas is 22″x28″, a dimension that is different than the aspect ratio the original photo was taken, I needed to crop the photo. Using the well practiced rule of thumb of the “rule of thirds”, I cropped the photo so the top left intersecting lines is where the focal point will be in this photo. This is the first time I’ve really thought about focal points. The rule of thirds suggests that a photo or painting’s focal point be located at an intersection of lines that divide the image into nine equal parts (2 vertical lines and 2 horizontal lines). The red lines on the photo above approximately does this.

I am also taking some creative license with my painting.

It all started when another student in my oil painting class suggested that perhaps one of the woman’s faces should be turned to the viewer of the painting. A discussion then ensued about which woman’s face this would be.

At first, it was to be the second woman from the right. Instead of just seeing the profile of her face, I would twist her face just a little more so that she would be looking at a viewer of the painting. However, based on another student’s suggestion, I finally decided I would turn the head circled in yellow towards the viewer of the painting. I figured based on the position of the body, it would be more natural. Also with the woman to her left whispering to her, it would engage the viewer to think about what could possibly be the secret they were sharing.