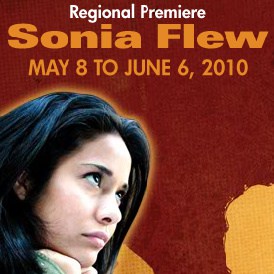 “Melinda Lopez’s play asks many questions – about family, about honor, and about the nature of patriotism and self-sacrifice,” states Artistic Director Rick Lombardo. “It wraps these deep themes in humor and love, and takes us on a thrilling theatrical journey from the American Midwest just after 9-11, to Afghanistan, Havana, Cuba at the time of the Castro revolution, and finally to Arlington National Cemetery. I’m so pleased to be able to introduce Melinda’s work to Bay Area audiences with this production.”

How do we forgive the past? For Sonia, her son’s decision to leave college and enlist in the military in the months following 9/11, conjures bitter memories from her childhood. As a child, Sonia was smuggled out of Cuba and into the United States during Operation Pedro Pan in the dawn of Fidel Castro’s rise to political power. Her parents vowed to reunite the family as soon as they were able to escape – she never saw them again. Sonia combats grief and terrifying feelings of abandonment as political forces once again threaten to shatter her family. Sonia must come to terms with her past, her parents’ decision, her children’s choices and her duty to her adopted country. Set between post-revolutionary Cuba and post 9/11 America, Sonia Flew telescopes the large cultural and political forces of an historic moment to examine their impact on the intimate lives of ordinary men and women.

Performances begin May 8 and continue until June 6.