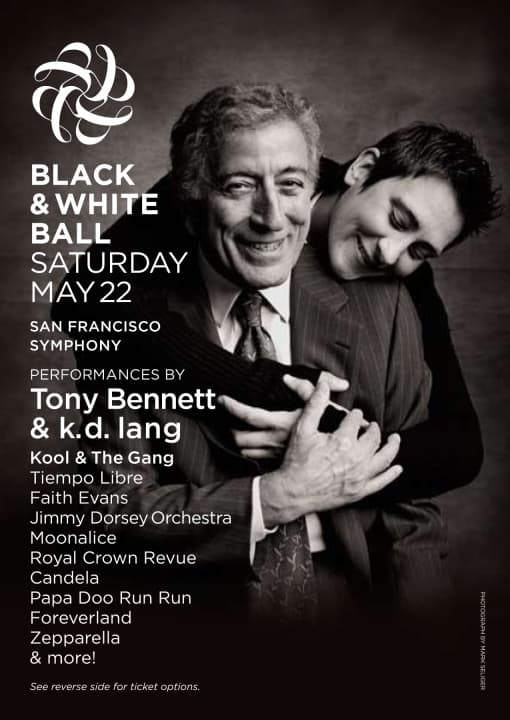 The San Francisco Symphony has announced the complete entertainment line-up for the 2010 Black & White Ball, to be held Saturday, May 22. Transforming San Francisco’s War Memorial Performing Arts Center into one of the country’s most elegant party venues, the Black & White Ball features a special concert and party line-up of 10 bands on five stages, dancing, food, drinks and the rollicking midnight surprise.

“The San Francisco Symphony’s Black & White Ball is an unforgettable experience for music and fun lovers around the Bay Area and across the nation,” said Chairman Patricia Sprincin. “It’s a glamorous night of fashion, music, food and fun for a great cause, benefitting the San Francisco Symphony’s Adventures in Music education program, which provides comprehensive music education to every single child in grades 1 through 5 of San Francisco’s public elementary schools. What a fun way for everyone to get involved in the excitement and the experience of the Black & White Ball.”

Online voting polls are now open for the Black & White Ball’s Build Your Own Ball interactive community campaign. The public is encouraged to vote to decide which top Bay Area DJ — DJ Sam Isaac, DJ Mei-Lwun or DJ Solomon — plays a prime main stage set before party headliners Kool & The Gang take the stage. Voters will also have the opportunity to vote for the official “Black & White Bite” from a selection of delicacies created by famed caterer McCall Associates. Additionally, popular online vote will decide which of three Colleen Quen couture ball gowns Chairman Patricia Sprincin will wear at the 2010 Black & White Ball. Online voting for Build Your Own Ball begins today and closes on Thursday, April 22, when the winners will be announced.