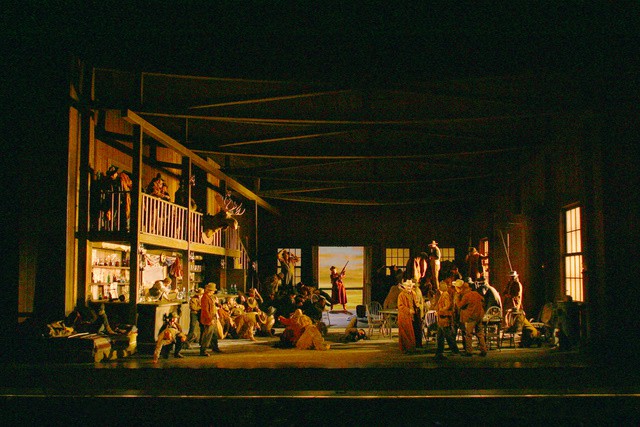 This new production of La Fanciulla del West marks the first collaboration between San Francisco Opera and Palermo’s Teatro Massimo, which will present the opera in December 2010 with Salvatore Licitra and Roberto Frontali reprising their roles. The sets, designed by Maurizio Balò and constructed in Sicily, are currently being shipped to San Francisco via New York City. Lorenzo Mariani, who directs this new production both in its San Francisco premiere and in later performances in Palermo, serves as artistic director of Teatro Massimo.

San Francisco Opera is leading the way as the first North American opera company to present La Fanciulla del West in its centennial year. Future 2010–11 productions at the Metropolitan Opera (December 2010) and Lyric Opera of Chicago (January 2011) will also star soprano Deborah Voigt as the iconic character Minnie. Maestro Nicola Luisotti, who will be on the podium for seven of San Francisco Opera’s Summer 2010 performances, will also conduct the work at the Metropolitan Opera, including a performance on December 10, 2010—the exact centennial of the day the work received its world premiere at the Met, conducted by the legendary Arturo Toscanini.

A love triangle set during the California Gold Rush, La Fanciulla del West returns to San Francisco for the first time in three decades in celebration of its centennial year. Based on the play The Girl of the Golden West by San Francisco native David Belasco, the libretto for Puccini’s opera was written by Guelfo Civinini and Carol Zangarini. The son of a miner and the author of the play that inspired another of Puccini’s most popular operas (Madama Butterfly), Belasco captures the spirit of Gold Rush–era California complete with a Wild-West saloon, a high-stakes poker game, a Wells Fargo agent and a beautiful, pistol-packing barkeep named Minnie. The author described his play as “a drama of love against a dark and vast background of primitive characters and untrammeled nature.”

Among his many musical compositions, Giacomo Puccini considered La Fanciulla del West to be the best opera he ever wrote. While watching a performance of Belasco’s play in New York City, Puccini was struck with compassion for the play’s central character, Minnie, and decided that she would be the subject of his next opera. He later explained, “I found a heroine who is very naïve and refreshing. I find truth and sincerity in this American drama.” Despite the fact that she is a gun-toting, poker-playing barkeep, Minnie’s resilience and her quintessential heart of gold represents the classic American, and specifically Californian, spirit. This character touched Puccini in a way that inspired him to “write music that I feel sure reflects the spirit of the American people and particularly the strong vigorous nature of the West.”