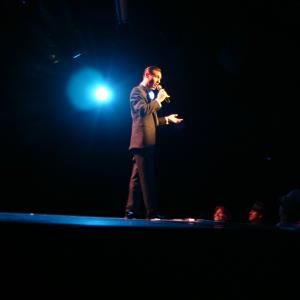 This is a trip back in time for those of you who remember “The Rat Pack” allegedly so nicknamed by their 5th member’s wife. We had the opportunity on Saturday night to visit “The Sands Hotel” as it was on a similar night in 1940. For just a moment close your eyes and if you had ever been in the Sands you could picture the night and the venue. Four talented young entertainers starting out on what would become arguably four of the most famous careers in the entertainment industry. But back to reality…

April 17 and it’s opening night for Sandy Hackett’s Rat Pack Show, a tribute to the legendary careers and antics of Frank Sinatra, Sammy Davis, Jr, Dean Martin, and Joey Bishop. The venue is far from the Las Vegas desert. It’s located on the 2nd floor of the Marines’ Memorial Theatre at 609 Sutter St, San Francisco however the show starts with pictures of the foursome in front of the Sands. Then, the photos disappeared one by one ending with the demise of that Las Vegas hotel icon. There’s a theme here that you will get if you see the production.

Opening night was almost a sellout. The theater was about 98% filled and the audience got their money’s worth. All actors had similar features to the originals and for the most part their voices were a pretty good imitation. While “Dean Martin” (Tony Basile) started out right on key, “Frank Sinatra (David DeCosta) and Sammy (Doug Starks)” took a few bars to be almost a good as the real thing had been. I’ve seen Sandy Hackett before (starting in 1985 in Las Vegas) and his comedy is as good as ever with lots of audience participation. His cover of Joey Bishop was done quite well, in fact, he was Joey’s pick to handle the imitation. 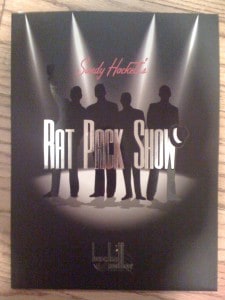 The “pack” takes you back through their glory years with individual and group acts that had been performed over the years. I must say it took me back a few years to acts similar to those I’d seen on TV dating back for me to the 1950’s and 1960’s.

This is one production I plan to see again to see how it progresses in this theater. The only drawback I found in the opening performance was the size of the theatre and the ability of the actors. For performers used to performing in large venues, a couple of numbers were almost too over powering for this theatre. Then again I was almost on the stage in what the theatre calls the “perfect seats” (Rows D and E) and I was getting the full impact of the sound from the actors and from the sound system.

The schedule can be found here along with a link to order tickets online. The production is scheduled to play through May 23 with shows on Thur, Fri, Sat, Sun and Mon. Weekend show times are 8:00 PM with matinees at 2:00 PM on Sat and Sun.

If you do plan on going to this production, one additional note on a dinner suggestion is offered. We ate at Puccini & Pinetti, just about 4 blocks from the theatre but on the way if you take BART. Puccini is located at 129 Ellis St at the corner of Mason. The service was exceptional even though they were extremely busy with a Saturday Night SF crowd and the prices not bad, by SF standards. We planned a very light dinner but everything was excellent. A review will be upcoming for the SSC Food section, but don’t miss the Caesar Salad or Lasagna.