Outside the winds are scraping along the Pacific Ocean and beating against thick white fabric held taunt against the frame of the large tent here at the Pebble Beach Food & Wine event. Inside a crowd forms and starts to wind its way into seats cozied up next to crisp white tablecloths. Each long row of tables is peppered with little plates of sausage, pita and humus. Empty wine glasses stood tall in anticipation of their thirst being quenched.

A warm glow emanates from the elevated stage as Michael Chiarello along with several assistants in well pressed chef’s aprons prepare for the cooking demonstration that would shortly commence. Later Michael will refer to this as the “pooh” he was in. It’s the condition when one starts prepping for a cooking demonstration much later than one would like.

As with any rock concert, Michael has an opening act. This one involves no wine, even though it is the Pebble Beach Food & Wine Event. Instead, the audience is educated on the terroir of water. Water, as the presenter proclaims, is the ultimate solvent and as it travels through different soils and rocks, it acquires a different taste which can impact one’s enjoyment of a meal.

I am instructed to sip from one of the two wine glass, which are now filled with clear liquids and then taste one of the items on the plate. I did note a difference. The soft velvety influence of one water compared to the sharp, cleasing nature of the other. What I couldn’t figure out though was if it was the terroir, or the mere fact that one was flat and the other a sparkling water.

This perplexing question was quickly forgotten as the main act commences. A quick introduction of Michael Chiarello and the main event begins. I first became aware of when I visited his NapaStyle shop in Los Gatos. In fact, the pulley island lights above my kitchen island are from that shop.

A few minutes into the cooking demonstration and I realized this was not going to be a step-by-step instruction on how you create one of his dishes. Frankly, this was a good thing since all attendees were comfortably seated behind tables with neatly pressed white tablecloths. Not the set up for hands on participation which is the really enjoyable part of a step-by-step instructor led recipe.

Instead, Michael thoroughly entertained the audience with stories from his grandmother and impressions of Julia Child and Wolfgang Puck, all while sprinkling in inspirational tips about cooking.

He starts with the analogy of “cooking as a sport” and the idea that part of the fun of cooking is everything that leads up to the actual meal. The foreplay as he likes to refer to it. Michael even goes so far to say it should be sometimes messy, “…you want to be in your food.”

He branches out to the artifacts in the kitchen and how using a pot which comes from a loved one enhances the overall cooking experience.

You need to have a relationship with your ingredients notes Michael as he dashes the contents of a pot with some olive oil. He proclaims the oil came from Jacques Pépin the evening prior.

The quality of ingredients is also important. He shares with the audience how iodine got into our salt and how you should never trust white salt which lacks the trace minerals that your body needs.

The centerpiece dish featured was a creation called “Old Bitchy Hen Broth Sauce” which Michael claims is “ugly, but good”

Midway through, I wasn’t sure what Michael was cooking anymore, but it all sounds heavenly and exciting.

I catch flashes of the ricotta gnocchi which is lightly covered in the “Old Bitchy Hen Broth Sauce” and Michael’s interpretation of Seuss’ green eggs and ham. The latter has soft boiled eggs (center still runny) that is covered in Panko bread crumbs and lightly deep fried over a bed of asparagus. It is a mentally and visually tantalizing dish.

Occasionally difficult questions are thrown into the audience. The first audience member that answers correctly is treated to a bottle of wine from Michael’s own vineyard.

It is hard to believe as Michael moves about on the stage plastered with Jenn-Air branding, telling stories about now, the past, real and imaginary, that I am transported in a blur to different parts of Italy, to his kitchen at home and to a Julia Child show. 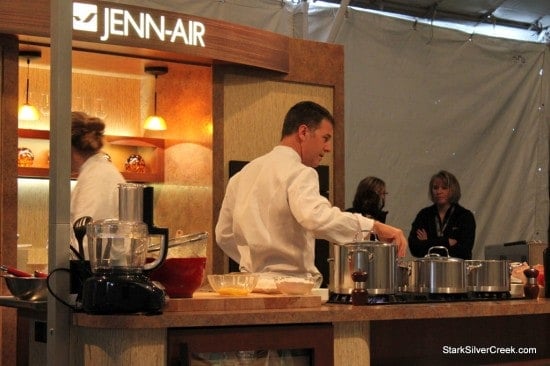 Michael approached the session with much spunk and passion. He went over the allotted time  by 30 minutes, yet almost everyone stayed on to bask in the entertainment of the session.

If Michael wanted to emphasize the foreplay of the sport of cooking, he nailed it with this session at Pebble Beach Food & Wine. His session was all foreplay. In the end, we were invited to look at the dishes, but not a bite was tasted…and no one seemed to care. 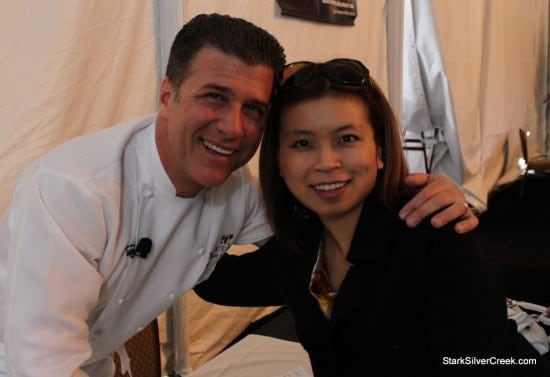 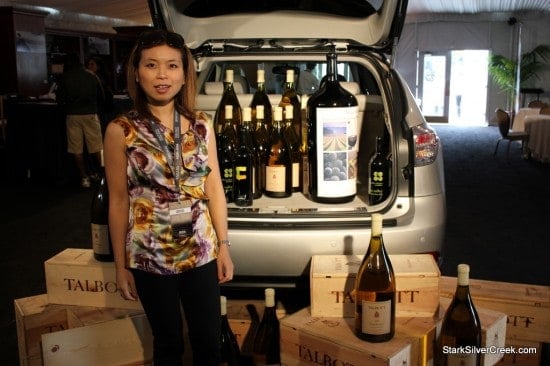