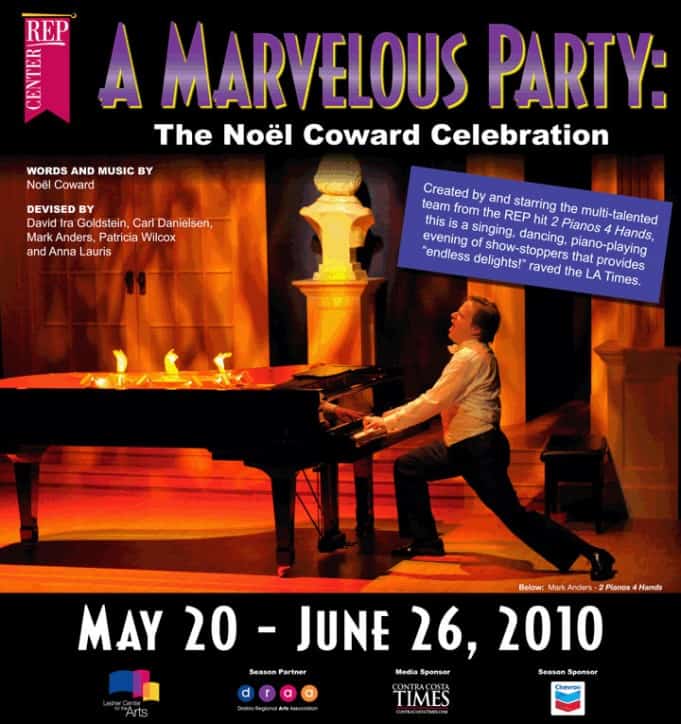 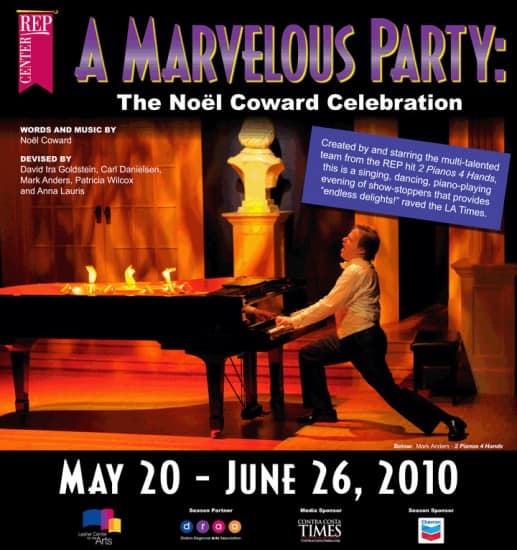 “Coward is well known as a personality and a playwright, but American audiences really don’t know his music,” says Michael Butler, the company’s artistic director. “That’s a huge part of his legacy.”

The show, which has been staged across the country, was devised by Danielsen, Anders, director David Ira Goldstein, and choreographer Patricia Wilcox. A Marvelous Party is an introduction to Coward’s words and music, but it’s not just a kaleidoscope of witty lyrics and sentimental ballads.

“I think we are very close to Coward’s original arrangements,” says Danielsen, who is returning to the Lesher Center with Anders after their success in, 2 Pianos 4 Hands, last year. “I thought, let’s do it simply, as he would have wanted it performed.” The production itself is anything but simple. There are two upright pianos for the two men to play—in addition to their singing—as well as a pianist at a baby grand piano, a drummer, and bass player.

Danielsen, who now lives in New York City, likes the way A Marvelous Party reflects Coward’s career. “There’s an operetta feeling to a gorgeous ballad like ‘I’ll See You Again.’ There are sweeping melodies. And there are discoveries that are among the highlights, such as ‘The Coconut Girl.’ People may know a couple of the songs, but they haven’t heard this material. Audiences have been ecstatic about the show.”

Until now, the best-known compilation of these songs was “Oh, Coward,” which originated in Toronto, Canada. “The problem is,” Danielsen says, “it was put together in the 1970s and written mainly for people who knew who Coward was, and there were a lot of medleys.”

The goal of A Marvelous Party was to create a streamlined but fleshed-out musical revue, with songs presented in their entirety, with choreography, and with an overview of Coward’s career. Of course the collaborators needed—and eventually received—permission from the Coward estate. “We were told we were the first people in 35 years allowed to create something new,” Danielsen says.

Butler says that even a two-hour revue cannot show the wealth of Coward’s talent. “He was a composer, lyricist, playwright, director, performer, producer and filmmaker,” Butler says, “and his popularity spanned two distinct periods of the twentieth century. “We live in an era of specialization now but Coward redefined what it means to be a ‘Renaissance man.’”