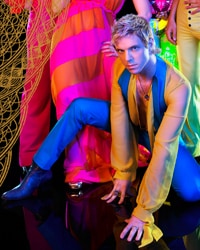 Carey Perloff, artistic director at American Conservatory Theater (A.C.T.) in San Francisco, today took the wraps off the 2010-2011 season. The cornerstone of the six-show season is the world premiere musical adaptation of Tales of the City, an irrepressible celebration of the spirit that still defines our City by the Bay. Amid the fog-drenched glow of disco lights, bathhouses, and the bustling soul of 1970s San Francisco, a wide-eyed Midwestern girl finds a new home—and a new kind of family—with the characters at 28 Barbary Lane.

“Creating a theatrical version of Maupin’s Tales has been a dream of ours for many years, and we’ve assembled the perfect creative team,” notes Perloff.

Marcus; or the Secret of Sweet comes to the A.C.T. in partnership with Marin Theatre Company and Magic Theatre who will open their seasons with the first two parts of The Brother/Sister Plays.

One play is TBA. And the always popular A Christmas Carol again returns in December.

“The experience of watching a story unfold in realtime with the sweat, passion, laughter, and tears of live performers inhabiting the same space as the audience is unforgettable. I hope you will join us for the remarkable theater experiences that await you in our 2010–11 season!”

Marcus; or the Secret of Sweet
by Tarell Alvin McCraney
Directed by Mark Rucker
Oct. 29—Nov. 21

No Exit
by Jean-Paul Sartre
Adapted from the French by Paul Bowles
Conceived and directed by Kim Collier
April 7—May 1, 2011

TBA
One more play to be announced.