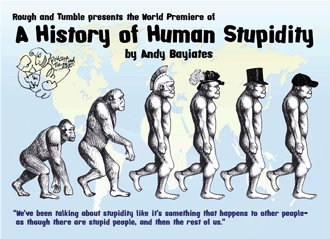 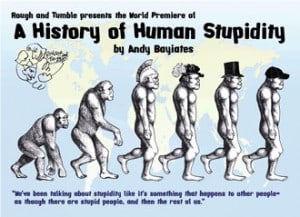 Rough and Tumble announced they will present the world premiere of A History of Human Stupidity, an intellectual vaudeville in three acts and a roast.

You lock your keys in the car. Stupid. You forget to close the refrigerator. Stupid. This kind of stupidity is everywhere. It’s probably what we most often think of when we think of “stupidity.” But that’s because we’re stupid. Real stupidity afflicts us when we make choices based on our beliefs, when we’re sure we’re right, yet we’re incredibly misguided.

This comedic examination of world history through the lens of helpful beliefs gone bad is Rough and Tumble’s first commission for the stage, and second collaboration with acclaimed playwright and former Neo-Futurist Andy Bayiates (43 Plays for 43 Presidents).