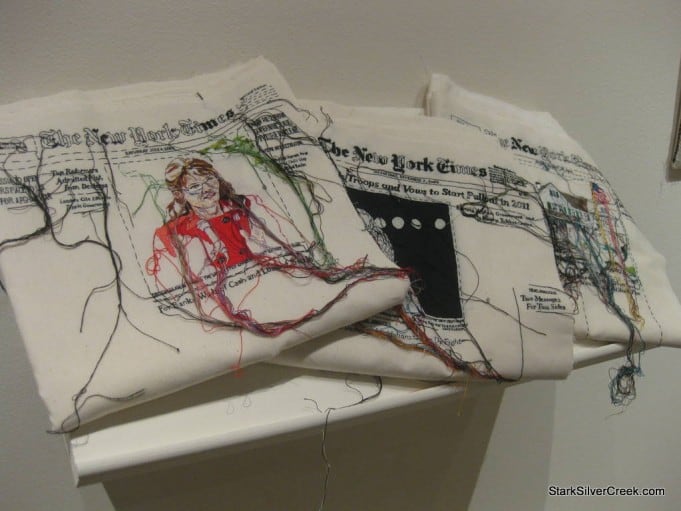 One glance at By A Thread, the latest exhibit at San Jose’s Institute of Contemporary Art, and you know this is not your grandmother’s embroidery…or your mother’s for that matter. The latest exhibit is a collection of works created by emerging and mid-career artists who use thread as their dominant raw material to create imaginative works of art.

What I enjoy most about the collection is that it explores unexpected applications of thread to shed new perspectives on a conventional uses for thread. In addition, it explores forms and shapes that one would not expect to be created from thread.

For example, one piece of work by Allison Watkins entitled Closet (2009) retraces the lines and silhouettes of pieces of clothing. I found it familiar, yet exciting. I liked how contrary to conventional notions of embroidery where all the threads are tightly bound against a cloth base and loose ends are tucked away, many of the pieces in this exhibit—including Watkins’ work—left threads hanging, the fate of them left to the imagination of the viewer.

One of the most enthralling pieces was also one of the smallest works; a set of projector slides whose images are not created from light and chemical against film, but instead sewn on by a multitude of colorful threads. I have a weakness for miniature creations and this small collection requires careful examination to fully appreciate all the intricacies in details.

There were also three-dimensional creations including sculptures and a relatively large installation of red threads in one corner of the exhibit that made me wonder how long the artist took to set it up.

I explored this exhibit both on a South First Friday event as well as at a Cinequest Film Festival soiree that just happened to be in the same location the evening after.

It was fortunate that this exhibit is so interesting, I had plenty to explore the second evening. The sense of wonder had not worn off on second exploration, in fact I found myself marveling each piece even more.

The exhibit runs from February 6 to April 10, 2010 at the Institute of Contemporary Art at 560 South First Street in San Jose.