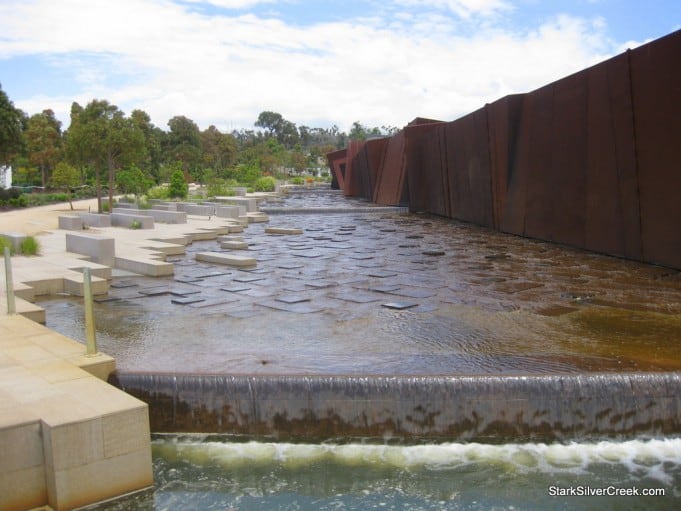 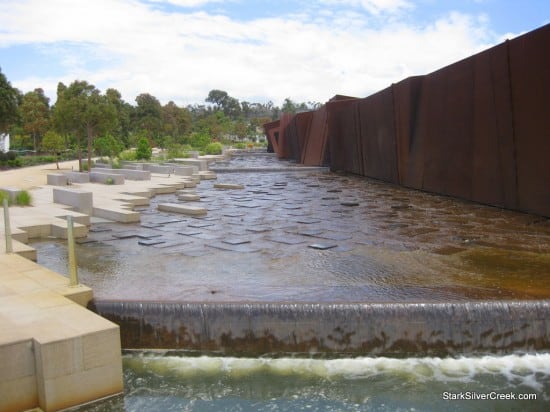 The Australian Garden, which is part of the Royal Botanic Gardens, was designed by Taylor Cullity Lethlean and Paul Thompson. Australian has immense biodiversity and the garden was designed to capture this within a walkable area.

The central attraction is the Red Sand Garden. With its striking color contrasts and geometry, it represents the arid parts of Australia.

The Exhibition Gardens were also fun to walk through. On display were landscaping ideas for the modern home that used water responsibly.

The most stunning feature of the gardens for me was the Rockpool Waterway and Escarpment Wall. I was told by our tour guide that the square rocks in the waterway were placed specifically so that the sound of the water would mimic those in nature.

Another impressive feature was a less visually spectacular display, but one that required extensive behind-the-scenes engineering. The display literally represents a slice of each of the ecosystems identified in Australia all in one garden. In order to do this, there is precise and separate watering schedules and soil types that have to be maintained in such a small area.

While I was there, quite a bit of construction was going on. The results of this activity will be complete in 2011 and includes such features as a hill-top viewing areas, more home-garden displays and picnic areas.

If you can’t make it out to this garden, you can explore it through these photos I took while there. Make sure to toggle through each of the four pages to see all the photos.