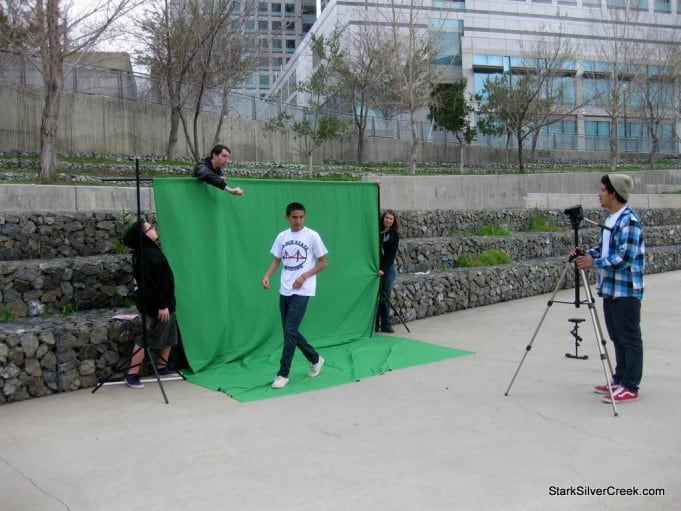 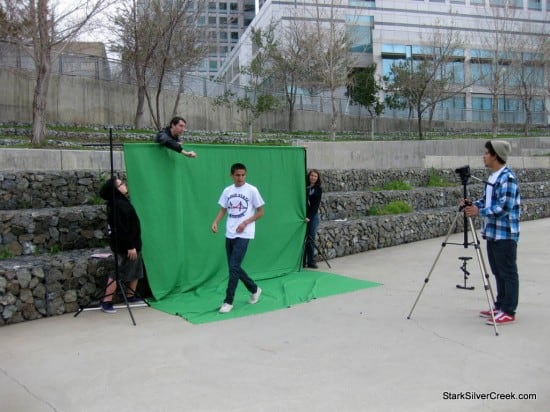 This past Saturday was the second meeting of the Adobe Youth Voices Cinequest Film Camp participants. While week one was all about coming up with ideas and storyboards (see “Adobe Youth Voices Cinequest Film Camp Week 1: Pre-production, a Zombie movie?!”), this weekend’s session was all about the collision of those ideas with pragmatic execution. The entire program consists of three weeks where about 30 future filmmakers get together in five teams and bring a film from concept to production to screening at Cinequest. Each team must choose an issue they feel strongly about which they would like to change or bring more awareness around. Topics this year span from the impact of pollution to the disappearing arts programs in education.

By the time I dropped in to this second session around 11am on Saturday, the group which had started working at 9am was in high gear behind computers, in front of green screens and madly cutting out characters and set objects from magazines. The goal of the entire day is to get enough of the concepts executed so that by the end of the day, each member of each team knew exactly what they needed to work on for the rest of the week on their own before the final Week 3 meeting where all of the content must come together into a cohesive film.

The mood was very different than last week when teams were clustered around brainstorming and selling each other their ideas for various aspects of the film. This week, teams were in quiet focus, putting together aspects of their production. Each team has at least one lead who helps to mentor the participants through this process. There are also several volunteers who have expertise in various aspects of film making coaching and guiding.

It will be exciting to see what happens in Week 3 of this year’s Cinequest film camp.