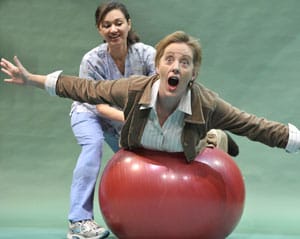 Exploring with great humor and passion the price one pays for being a totally engaged member of society, THE FIRST GRADE follows the sometimes comic, sometimes frightening journey of a woman whose attempts to save her physical therapist from harm leads her into a chaos that includes a class of first graders, her depressed daughter, and an ex-husband with whom she still shares a home. THE FIRST GRADE originated as one of last season’s Global Age Project (GAP) finalists and is the first main stage production to develop from the GAP. Playwright Joel Drake Johnson was also recently named a GAP finalist for a second year in a row for his new play A Guide for the Perplexed, which will receive a staged reading as part of this year’s GAP festival on Monday, February 1; A Guide for the Perplexed will receive its main stage World Premiere next season at Victory Gardens, starring Kevin Anderson.