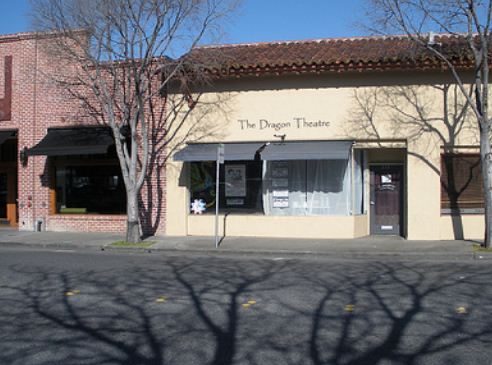 Dragon Productions Theatre Company is about to start their

Born out of actors’ frustrations for opportunities to perform and built on the dream to provide those opportunities, Dragon Productions Theatre Company was born in Los Angeles in 1998.  Soon after in 1999, the founder, Meredith Hagedorn moved to the Bay Area and began producing.  In its nomadic state, Dragon staged nine productions around the Bay Area before building a home in downtown Palo Alto.  The 2250 sq. ft. 42-seat Black Box theatre was completed in February of 2006 on the corner of Alma and Hamilton.

An Adult Evening of Shel Silverstein is a tribute to Silverstein’s gleeful and at times ghoulish humor. The evening is made up of ten delectable helpings of Silverstein (definitely for adults only!) culled from his various play series, most of them more in the mode of sketches than one-act plays. Most set the mind to buzzing with new ways of seeing and understanding, and most are hilarious even while being sometimes painful.
Burn This by Lanford Wilson (dir. Dale Albright) Mar. 12th – April 4th

After the death of a dancer, the lives of the people closest to him intersect in ways none of them expect. In this emotional and powerful drama, Tony Award and Pulitzer Prize winning author Lanford Wilson examines the distance between people who have denied themselves the true depth of their feelings. Reflecting on the power of the creative process and the redeeming nature of love, the play tells us to “make it personal, tell the truth, and then write ‘burn this’ on it.”

Anton in Show Business brings together three mismatched actresses, cast in New York City for an ill-fated Texas production of Chekhov’s The Three Sisters. Life reflects art in this award-winning comedy where uproarious comedy and wild antics abound in a behind-the-scenes peek into those five magical words: “Let’s put on a show!”

A curiously compelling exploration into the basic tenet of life. Seascape asks in a lighthearted but heavy-minded fashion whether life is worth living. It decides that there is no alternative.

An off-beat romantic comedy that provides an examination of who is insane or what defines insanity. The result is an enjoyable fantasy that dances along the perilous edge of whimsy.

The Turn of the Screw Adapted by Jeffrey Hatcher from the story by Henry James (dir. Meredith Hagedorn) Nov. 5th – Nov. 28th

Described by Stephen King as “the quintessential ghost story,” The Turn of the Screw became one of James’s most famous works. Jeffrey Hatcher’s adaptation condenses Henry James’s story into a heart-stopping ninety minutes with a very minimal setting and only two talented actors. The play is terrifying because each audience member’s imagination brings the ghosts to life.
PROGRAMMING
Our struggle to provide professional quality theatre to all is challenged to keep our ticket prices competitive with other companies. In addition of offering a full season of contemporary classics & rarely-seen works, Dragon Theatre offers a wide variety of performing arts classes, numerous special events, an adult and young artists series, and rents its space as a venue to other organizations. We currently have two major programs running of which we are quite proud:
DRAGON AFTER HOURS began on February 28, 2009 as a late night series to showcase individual and group talents in the Bay Area. Emerging artists of all types are given the opportunity to perform their acts in our theatre every Saturday night starting at 11:30pm at no cost to them. This program has been going strong for almost a year & we have no plans of stopping as long as there is talent in need of a venue.

DRAGON STORY TIME is fully sponsored, at this time, by the John and Marcia Goldman Foundation. In our continuing effort to reach younger audiences and build an educational outreach program, Dragon Productions has implemented a story series that specifically caters to young children and their families. Different from the storytelling sessions that may occur at bookstores or libraries, Dragon’s goal is to bring to life the action of the text and inspire its young audiences to participate in the imaginary circumstances by creating an environment where the stories on the page become a physical script to act out and fully embrace. This not only encourages an interest in reading, but a passion for verbal communication, artistic expression, musical enjoyment, and human interaction and furthers the experience as an educational tool to positively aid in child development. Because of the current funding from the Goldman Foundation, we are able to provide these events free-of-charge to less affluent families.

The challenges are many to keep a small theatre like Dragon alive. Dragon must face an exorbitant amount of rent and overhead expenses in order to maintain its downtown Palo Alto venue. We must continue to “think outside the box” to come up with new ways of creating new avenues for funding & new ways of marketing on an extremely low budget. All these elements could not fully manifest themselves without the founder, Meredith Hagedorn, at the helm. As a full-time volunteer herself, Meredith is not only the Executive Producer and Managing Artistic Director, but she wears a great variety of hats to keep things running. Some of her fabulous chapeaus include being the Props Master & Costumer for many of the productions, Production Manager, Marketing, Fundraising, Web Master, Facilities Manager, & janitor. Several wonderful individuals have been there from the beginning to support Dragon and help Meredith, but there is need for so much more. Therefore our new push to grow the Board and volunteer base in order to enlarge the Dragon family and weather this economic storm is as critical as a diverse funding stream. We hope to continue to provide a busy theatrical facility in downtown Palo Alto for years to come.