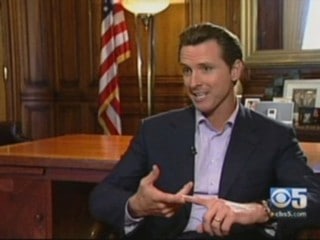 Got to hand it to CBS for this interview, maybe. Not holding back the punches, they let some obvious bad blood spillover here to challenge the recently media-shy (and often sick) San Francisco mayor Gavin Newsom on a series of not-so-fun topics: the city’s deficit, his pattern of cancelling public appearances, the reasons behind dropping out of the Governor’s race, etc.

Not that the city of San Francisco really cares too much.

Newsom is no stranger to controversy, having survived just about every scandal you could imagine, while still maintaining perfectly coiffed and slicked hair, a wider than Tom Cruise grin, and suits even Willy Brown would envy.