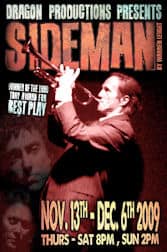 Sideman: A sideman is a professional musician who is hired to perform or record with a group of which he is not a regular member. Sidemen are generally required to be adaptable to many different styles of music, and so able to fit smoothly into the group in which they are currently playing.

The Dragon Theatre’s Side Man is a touching, painful dark comedy about a broken family and modern Jazz in the post WWII years.  This Tony Award winning play is touchingly narrated by Clifford (Alex Hersler), the veteran enabler son who struggles to keep his family together through alcoholism, unemployment and a changing world that consumes his parents.

Warren Leight’s semi-autobiographical memoir gives us an enlightening view into the decline of the big band era and the story of what happened to some of the talented musicians who struggled with their careers and everyday life in the years that followed.

Clifford’s story weaves the tale of his mother Terry’s (Sandy Rouge) gradual descent over the years from a naive young woman to dissipated alcoholic. She is married to the disconnected Gene (Kurt Gravenhorst), a Jazz player who is incapable of living in the real world.  Surrounding this tableau is a waitress and group of colorful musicians who fill the story with humor, tragedy and a good dose of charm.

Sandy Rouge is particularly strong as crazy Terry in a powerful role that launched Edie Falco’s career on Broadway.  Alex Hersler’s performance grows throughout the production and by the second act his Clifford is incredibly moving. Jim Johnson as Gene’s Jazz crony Ziggy is a scene stealing winner.

The diminutive Dragon Theatre sits in a storefront on Alma Avenue. The house is small with about 40 seats which puts the audience virtually into the lap of the players. This production has a particularly strong ensemble. One hopes that community and sponsor support will help provide future productions with the staging and costumes befitting the quality of the cast and direction of Side Man.

Side Man runs at the Dragon Theatre from November 13th to December 6th.