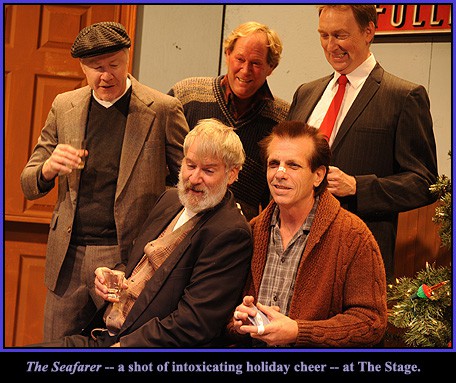 If you’re looking for non-Christmas theater, breathe a sigh of relief as San Jose Stage Company is giving us something different. The Chicago Tribune calls The Seafarer “the best Irish play since the glory days of Samuel Beckett.”

The story focuses on men coming home from the holidays who focus on achieving blind drunkenness above all else. Now, that’s the spirit! However, the Stage web site does quote the NY Times in calling The Seafarer “pick-me-up play of the season.” Is that pick-me-up as in ho-ho-ho holiday spirit? Or is that pick-me-up as in off-the-floor?

It should make for some interesting theater.

Written in 2006 by Irish playwright Conor McPherson, the story takes place in Christmas Eve in Baldoyle, a coastal suburb north of Dublin city. It played in London that same year, and in 2007 on Broadway at the Booth Theatre. Since then, it has been produced five other times including within the United States and Ireland.

The Seafarer : The Essential Info

Tickets: $20 to $45, with discounts available for students, seniors, and groups of 10 or more.

These men who make their way home for the holidays aren’t exactly looking forward to sharing a cup of holiday cheer. But a stranger in their midst, in town to collect a major poker debt, forces them to take a look at their lives — and where they’ll end if they’re not more careful. The Tony Award winner is a darkly funny examination of Ireland’s culture of drinking and the arguable states of grace achieved by those who embrace it.

You can purchase tickets online via Ticketweb, or call the Box Office at (408) 283-7142 to reserve your seats.