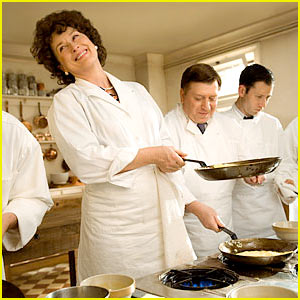 Ever since the movie Julie & Julia arrived in cinemas, I’ve been meaning to go see it. The wonderful write up by Pat Reardon on her experiences with making Beef Bourguignon only tempted me further. Alas, between the theater season being in full swing, a pile of Cinequest movies beckoning me to screen and my travel schedule, I didn’t have a chance to see the movie.  Until, of course, it found me on a United Airlines westbound trip from DC to San Francisco.

It seemed as a serendipitous prelude to the start of the movie, the gentleman seated to my left, Jim, who lives in San Francisco, noted that he used to see Julia Child and her sister shopping for groceries all the time. He noted both Julia and her sister were hard to miss amongst the piles of produce as both of them were very tall women.

For those that follow my twitter stream (@lonikaostark) you would know that I just found the movie “OK”. After I broadcasted this verdict a couple of my friends responded noting that they loved the movie. An expected response after several of them had set my expectations high prior to watching it.

The former of course is the Julia Child story which highlights the true spirit and good nature of a woman on a mission. I don’t know how historically accurate the story is or how the superb acting of Meryl Streep really reflected the true character of Julia Child, but I think it doesn’t matter. What did matter was the way this storyline made me feel. The relationship between Julia and her husband is heartwarming and her desire to overcome the stereotypes in French cuisine and “confront the duck!” was inspirational. If I need a boost in gumption I would watch as Julia practiced all night to slice onions so that she would be the best. In some ways, the Julia Child story reminds me of my mother who is the only lathe machinist in her entire company in Canada and has to deal with people’s initial perceptions because she is a woman.

The Julie Powell story line was lackluster. I didn’t find the main character likable and her friends were even less desirable. At first I did sympathize with her as a front-line call center staff of a government agency trying to make a difference. However, as the story progressed, Julie was just reduced to a whiny obsessed blogger/cook whose new found passions just made her perspective on life narrow instead of expand. In the end, I didn’t feel that she grew as a person and can only imagine how selfish she could further become by getting a book deal or film deal as the end of the story alludes to. Note this is my sentiments based only on how Julie is portrayed as a character in this movie.

Hence, the Julia Child part of the plate was superb, titillating. But unlike a plate of food, when watching a movie you can’t pick and choose what to feast on. Hence in the end, this movie was “just ok” in its entirety.