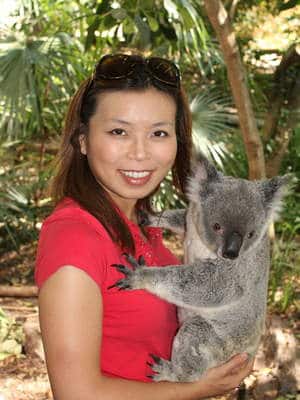 Spent yesterday on a city tour of Brisbane, Australia and hanging out with koalas, kangaroos, lorikeets, emus, and sheep dogs at the Lone Pine Koala Sanctuary. It is the world’s first and largest koala sanctuary with over 130 koalas.

This is one of the few places you can actually hug a koala because you need a sizable number of them to ensure koalas are not being handled to long by strange humans.

According to my guide, Bob, there are only about 100,000 koalas left in the world because of the destruction of their habitat and in the past, they were hunted and killed for their skin.

I have many more photos, videos and stories to share (including a koala kiss!), but unfortunately the connection here at the hotel in Brisbane is slow and drops easily, no excuse when charging $25 (Australian dollars) a day.

Perhaps I will fare better on the internet front in Sydney, Canberra and/or Melbourne and I’ll be able to post more stories of my adventures. Either way, you’ll hear all the stories, its just a matter of sooner versus later. However, with Twitter, Facebook, Blogs and other social media tools, haven’t our expectations around immediacy of information and engagement skyrocketed?

Advice: Be patient, smell the flowers and hug a koala!