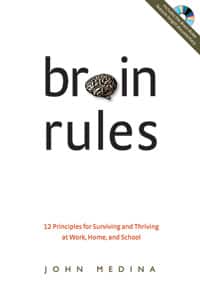 Developmental molecular biologist, John Medina in his book, Brain Rules tries to distill and demystify the volumes of research on the human brain, while practicing what he preaches.

For anyone interested in keeping their grey matter in optimal shape, Brain Rules provides a practical set of 12 rules that explains the importance of certain actions and lifestyle choices which would lead to improved brain performance. Medina does spend some time explaining the known science behind why the brain has evolved to what it is today. However, this is used to set context for proposals on how we can change personal actions and designs to institutions such as schools and offices to enhance mental acuity.

Some of my favorite chapters include “Exercise: Rule #1: Exercise boost brain power” and “Sleep: Rule #7: Sleep well, think well” which provide empirical evidence on the connection between a well-oiled brain and the amount of exercise and sleep one gets. Other chapters I thought strayed away from this theme of giving practical advise such as “Survival: Rule #2: The human brain evolved, too.” which explained how our brain works, but it didn’t conclude with any strong directive on how we should take care of our brains better.

One of the challenges that Medina faced in creating such a book was practicing what he preaches. A difficult task with just ink on pieces of paper. He strives to be interesting to abide by his rule #4 “We don’t pay attention to boring things” and in the end of each chapter he highlights the key ideas to reinforce his rule #6 on long-term memory “Remember to repeat”. It is no surprise that he created a 45-minute film introduction to the book in order to provide other forms of stimulus such as sounds and motion to help the brain remember the substance of his work, Brain Rules.

Overall, I thought it was an entertaining and easy read in the style of magazine articles more than an academic dissertation or a literary work, which is just what Medina was probably striving for.