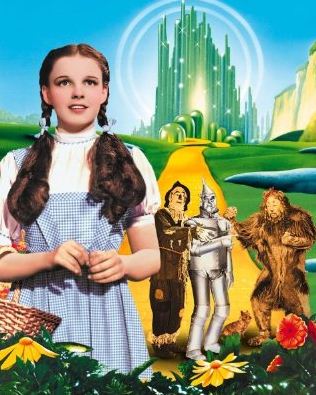 Talk about aging gracefully. The Wizard of Oz, one of the most famous and beloved movies of all times, turns 70 this year. After touching so many generations of movie goers, and especially television viewers in the late 1950s, it seems like a rainbow has indeed bestowed eternal magic on this 1939 classic.

Trying to describe how monumental this film is, or to impart the emotion one feels inside when we watch a bright eyed Judy Garland step out of her home into a land of scarecrows, lions, tin men, witches—in color!—is simply a task best left to Wizards.

Then there is the music. The dancing. The fantastical special effects, before CGI and green screen.

As a child, I remember my mother watching it every time it came on, never missing a moment. She would hum along as she sewed, ironed. It made me feel good. Well, at least until the wicked Witch of the West appeared along with her evil monkeys. Poor Toto!

Oh, thought for the day, who do you think melts better, the Thing, or the Wicked Witch?

All of this long winded intro, to say: Happy Birthday Wiz. And, to let you fans out there know that next week (Sept. 29) a special high definition Blu-Ray version of the film will be launched. I thought it looked good on DVD. I can only imagine what it will look like in HD!

I’d be tender – I’d be gentle and awful sentimental
Regarding Love and Art.