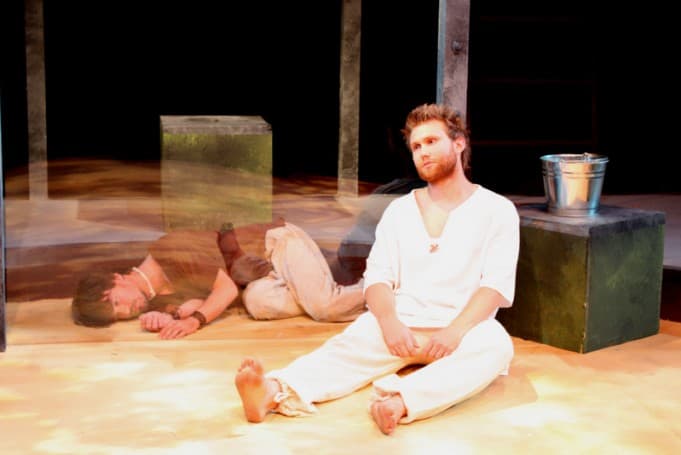 The Last Days of Iscariot

Even before I stepped into the theater, the premise of this piece intrigued me.

The entire play is set in purgatory, the place between heaven and hell where, according to the production’s playwright Stephen Adly Guirgis, a Judge Littlefield (Bill Davidovich) has presided for over 140 years providing the last trickle of hope of making it to heaven. It is here that the fate of Judas Iscariot’s (Isaac Benelli) soul is on trial.

The production, bolstered by a strong script and acting, quickly pierces through traditional biblical rhetoric to deliver blow after blow of intense humor that is as black as the stage set. What became unassumingly apparent to me mid-way through this play is that the trial of Judas is merely a red herring. For as Yusef El-Fayoumy (John Romano), the hilarious sweaty erection-bearing prosecutor condemns Judas and Fabiana Aziza Cunningham (Alika Ululani Spencer), the smoldering boob-bearing attorney defends Judas, I realized quickly that what was really on trial was my perceptions and judgments about truth and loyalty.

Each character who is called out as a witness, including the notable Mother Teresa (Patricia Tyler), Sigmund Freud (John Baldwin) and even Satan (Jeff Clarke) himself gives convincing testimony that both confirms and contradicts conventional perspectives of Judas and if nothing else, makes us appreciate the difficulties of the times, the choices that needed to made and the process by which the Bible was written.

One of the most fascinating witnesses in terms of dialog is Caiaphas the Elder (Bill Davidovich) and the discussion of the difference between him and Judas.

While the production has a strong script, its success falls on uniformly strong acting and the comedic timing sense of director Kit Wilder. Of particular note is John Romano’s performance as prosecutor Yusef El-Fayoumy who if he wasn’t such an entertaining character, would have condemned the entire play to purgatory.

Two places where the play loses a little momentum are at the beginning of the second act and during the final monologue.

The City Light Theater’s production of ‘The Last Days of Judas Iscariot’, which was originally performed by the LAByrinth Theatre Company in 2005, is immensely entertaining. It probes the dark places where we contemplate good and evil.

City Lights Theater starts the season, “Hold on Tight”, with a bang. The play may be unknown (having played in NY in 2005, directed by Philip Seymour Hoffman), but we’re lucky to have it here in the Bay Area.

It’s a gem of a purgatory courtroom drama. You know the kind, where entrance to heaven is at stake, and people lament the “Americanization of the after life.”

The script is clever, witty, and occasionally takes an intellectual detour; giving the material significance and challenging the audience to question their beliefs, faith and morality. Where are you?

I was slightly apprensive when I read the background of the play before heading downtown to CLTC. It’s weighty, has a large cast, and a lot of dialog—all ingredients for an art house flop. Thankfully The Last Days is anything but.

“This is purgatory and I’ve got all day.”

Acting is strong, aside from an unfortunate miscasting in one of the lead roles that sometimes hobbles the proceedings.

John Romano (lawyer El Fayoumy) anchors the production with a superb performance. His mannerisms, sweaty forehead, and perfectly timed lines, “I do the exercise!”, lit up the stage. At times he reminded me of Peter Ustinov.

As his fate is debated, Judas (Isaac Benelli) spends the majority of the play in a transfixed, almost Tommy-like catatonic state in a glass chamber. He comes to life in flashbacks with powerful bursts of raw energy and emotion.

Alika Spencer as defense counsel definitely ratchets up the sexual heat factor, strutting across the courtroom with plenty of leg and cleavage action. Like El Fayoumy, I had no objections. Permission to cross examine!

In a minor, but important part, Henrietta Iscariot (Vera Sloan) opens the show with an emotionally charged and convincing monologue. So, this is a biblical crowd warmer?

The set, music, and lighting are minimal. It’s a refreshing change from some of the bigger, more expensive (and excellent) productions now playing around the Bay Area. Just be ready to make a mental commitment to digest 2 hours and 40 minutes of thought provoking and profound dialog.

American Idiot? According to Satan, “if you wanna rock, hell’s the venue.” And The Last Days is the play.

What others are saying

Jesus is present, of course, with Robert Campbell projecting benevolence. Judas continues to question Jesus’ constancy in a climactic scene, but Jesus says, “I’m not above it all. I’m right here in it.” Couple that with a revelatory line from Freud — “Any God who punishes the mentally ill is not worth worshiping” — and you’ve got a succinct summary of Guirgis’ message. The play is not that succinct. It could stand to be about 20 minutes and 20 F-bombs shorter, and a few audience catnaps may be inevitable. But it’s a lot more fun than we have any right to expect from Judas.