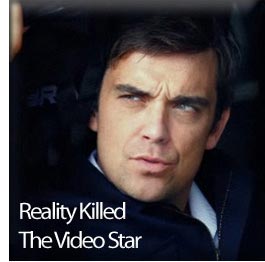 Yes, at least according to an MTV poll, Robbie Williams is the “Greatest Superstar Ever.”

If you live in the US, you are wondering out loud, Robbie Who? Or possibly even confusing him with the funny man living in San Francisco, Robin Williams. Nano nano.

But if you’re from the UK, then say no more. Their prodigal son is as famous as famous can be. Something that didn’t translate so well over here (but better in Canada).

Most recognized for his ballad ‘Angels’, regarded as one of the best pop songs every written, Robbie Williams is possible the best living example of over-achieving. Of modest talent, but pure ambition, his live performances have become something of legend. His Knebworth concert is the largest UK show ever drawing 375,000 fans, and another 3.5 million on television and online.

But how can Michael Jackson finish third in this poll—even behind runner-up Take That?! Hmmm, I smell something odd here.

Further Googling: Mr. William’s next album, ‘Reality Killed the Video Star’ (dubbed a comeback), is due later this year. Well, well. It seems like this is a little bit of well-timed publicity, no?

It’s amazing what you can do with pollmonkey.com these days. Hey, that sounds like a sure RW single… “Me and my Pollmonkey!”

You be the judge: smash or trash?