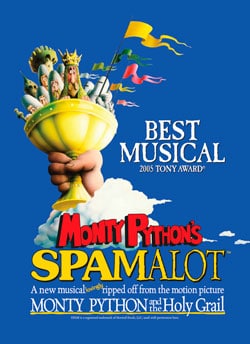 Winner of the 2005 Tony Award for Best Musical, MONTY PYTHON’S SPAMALOT is the outrageous new musical comedy lovingly ripped off from the film classic “Monty Python and The Holy Grail.”

Directed by Tony Award-winner Mike Nichols, with a book by Eric Idle and music and lyrics by the Grammy Award-winning team of Mr. Idle and John Du Prez, SPAMALOT tells the tale of King Arthur and his Knights of the Round Table as they embark on their quest for the Holy Grail. Flying cows, killer rabbits, a bevy of beautiful show girls, not to mention taunting Frenchmen and show-stopping musical numbers are just a few of the reasons audiences everywhere are eating up SPAMALOT.

RATING: Family friendly for teens and older – (by the creators of Monty Python – ‘nuff said!)