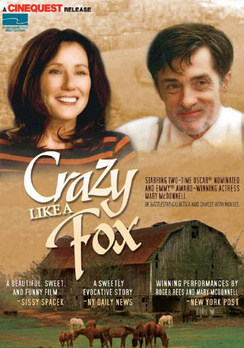 ‘Crazy Like a Fox’ is a beautifully shot film about Nat Banks (Roger Rees), an 8th generation owner of a family farm, Greenwood, who has hit financial hard times.

The movie doesn’t go into much detail as to how he and wife Amy Banks (Mary McDonnell) ended up in such a predicament although there is a comical reference to some horses that ate too much corn.

The financial hardship leaves the family no choice but to sell the property to a power couple, Will and Ellie Sherman, from Washington, DC who from the onset seem to be interested in restoring the grand home on Greenwood. They even offer the Banks family to opportunity to stay on as farm managers.

However, we soon find out that the lawyer and real-estate broker couple have other things in mind and once the contracts are signed which finalize the sale, Nat Banks is handed an eviction notice. In a desperate move, Nat Banks decides to camp out in a cave on the property while he figures out how to get the property back.
Roger Rees is superbly cast as Nat Banks and convincingly plays his part as the eccentric and moody owner of Greenwood. Mary McDonnell as Amy Banks anchors the family element of the story.

I thought the first part of the movie started off strong with a well-structured conflict between the Banks and the Shermans fighting for Greenwood. However, as the story progresses, the conflict becomes trite as it seems everyone in the town is on Nat Bank’s side. The judge, police and shopkeepers are all friend, cousins, nieces etc. of the Banks and the Sherman’s really don’t have a chance. Without a strong element of conflict, the movie does loose some steam mid-way through as it seems one party after another bulldozes over any legal merit of the Sherman’s case.

One of the film’s strongest elements is the beautifully shot scenes so it was disappointing when the closing credits were done on a backdrop more consistent with a b-movie. The warm relationship between Nat and Amy Banks was also a pleasure to watch, it is a rarity in films I think that portray real relationships instead of the Hollywood moments of infatuation.

As a Friday night movie after a long hectic week, recommended. From the reaction of Clint while watching this movie, I suspect it may fall into the category of “chick flick”.

I liked the spirit of this movie. But it suffers from a major identity crisis. Is it a comedy? Drama? Or something in between? Just when it establishes rhythm, the mood abruptly shifts leading to confusion and lost momentum.

I agree with Loni that Roger Rees is the highlight.

But otherwise it doesn’t make a lot of sense. Farmer doesn’t want to sell. Puts up fight. Then lives under a rock, almost literally. Then back in the house again. I just didn’t get it. Plus, the “villains” were cardboard stereotypes and really didn’t provide much conflict to give the story some teeth.

There are some beautiful shots. However, in the first half of the film in particular, the Director and/or DP moves the camera too much: sweeping up, then down, sideways. Too bad, because a steady, regular shot in a lot of scenes would do the job just fine. Anytime I find myself focusing more on the camerawork and less on the story and acting is a bad sign in my books.

Not a terrible movie by any measure, but average.