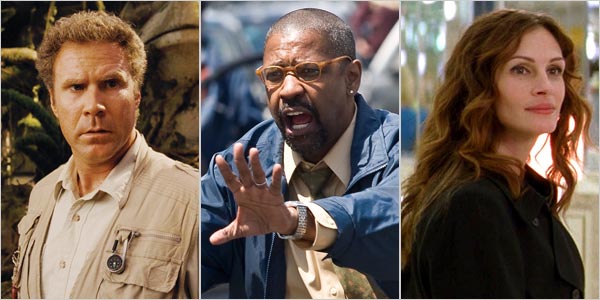 According to a New York Times article, “the spring and summer box office has murdered megawatt stars.”

The story surprised me as I always pictured big A-listers of the past like Arnold Schwarzenegger, Bruce Willis and Will Smith lighting up the charts, especially over the so-called blockbuster summer months.

But times, they are a-changin’. At least based on this year’s box office.

Major stars including Denzel Washington, Julia Roberts, Eddie Murphy, John Travolta, Russell Crowe, Tom Hanks, Adam Sandler and Will Ferrell, are all under performing. The exception may just be the recent Brad Pitt star vehicle, Quentin Tarantino’s Inglorious Basterds which is off to a strong start. The others though are bombing, and in most cases not breaking even (e.g. “Land of the Lost,” a $100 million comedy sold only $49 million in tickets in North America).

Which begs the question: are A-listers still worth their $20M payouts?

I’m not suggesting stars will disappear. I think that would be impossible. Their magnetisim draw crowds, and builds loyal fan bases over time. But it’s hard not to imagine, with all this talk of social media, that they now have less impact on box office sales.

From the NYT article:

But some of the same well-worn reasoning for declining star power has become even truer with time: people are harder to move off the sofa; a plethora of entertainment options competes for time and attention; the Web and paparazzi culture have made it difficult for stars to stand apart as rare and unique.

This argument is becoming increasingly common, and I believe real. There are far more entertainment options today than ever before: video games, the Internet, social media (Twitter, Facebook, for example), streaming video services (Netflix, Hulu), and, of course, let’s not forget all-time popular time sinks like “super-poke.”

Perhaps this next generation would rather be in the action, then merely watching it on a screen.

Social media is about engagement and interaction. Watching a movie is passive by comparison. The two are at polar extremes.

Also, word of mouth is faster than ever. It’s no longer like the shampoo commercial where one friend tells another by whispering in their ear. Now we’re at warp drive. Nano-seconds. One text to the next. One tweet to the next. In a matter of seconds your film can be DOA thanks to social media and the rapid fire tools that allow people to broadcast their opinions, good and bad, true or not, around the world.

“You look around the theater and can see the glow, not on people’s faces from watching the movie, but on their chins — from the BlackBerrys and iPhones,” said Mr. Guber. “They are immediately telling their friends whether it’s worth their time. And the answer to that, more often than not, seems to be no.”

There is another theory, of course, lest all this social media overcomes us: 2009 could be an off-year for Hollywood. Time will tell if this is the start of a trend, or just happenstance pontificating and armchair quarterbacking.