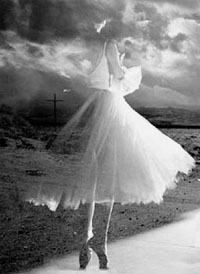 Amargosa: The Story of Marta Becket

Amargosa is a documentary about the life and passions of Marta Becket, a dancer and artist who decided to move from the bustle of New York to the remote ghost town of Death Valley Junction, California and set up a theater house.

The opening narration and dramatic panoramic shots reminded me of the magic of film as I was instantly transported from the familiar surroundings of my family room into Marta’s world of ballet and art.

The film does more than just profile Marta’s journey from New York to Death Valley Junction to establish the Opera House. It also delves into Marta’s relations with her parents, her ex-husband and the community of Death Valley Junction.
One of the most memorable themes in the film is Marta’s relationship with her father who from childhood was not supportive of her artistic endeavors. Marta recounts how her father visited her at the Amargosa Opera House and could not understand why she would set up life in a desert town. Years later, National Geographic profiled the Amargosa Opera House. Marta purchased a subscription to the magazine so that her father would be surprised and perhaps proud to see her featured in an issue. Two days before the magazine arrived, Marta’s father died. Marta in her seventies still tells this story with such clarity and I was struck by the powerful need by any child for the approval and love of their parents.

However, the dominant theme in this film is the strength of the creative spirit of Marta Becket. From the blank canvas of a desert town, Marta was able to create a precious hand-painted theater where she is able to showcase her skills and passions as a dancer, singer and actress. In the desert, she has flourished.

The documentary, like the Amargosa Opera House is well crafted. It doesn’t try to be the focus of attention. Instead,  it provides an intimate lens. In the end I feel like I have met Marta Becket, had an intimate evening with her and left with a new appreciation for her passions.

I was inspired by the film and hope to one day have so much passion and substance within, that I can create and impact the community and landscape around me as Marta has in the town of Death Valley Junction, California. For now, I am contemplating starting an oil painting… it has been a while since I have painted but Marta Becket has made me realize it is never too late.

I had to check Google immediately after the end credits rolled. Could this be true? A tiny, 73 year old woman opens an opera house in the middle of nowhere (well, almost nowhere, it’s still only 2 hours away from Las Vegas). Death Valley Junction. Population 10. And sells out one woman shows after single handedly restoring the theater house including painting intricate murals on the walls, and ceilings. Come on, can this be for real?  Turns out, truth is, once again, stranger then fiction.

There are ‘Whatever Happened to Baby Jane’ moments throughout. Is she clinging to a lost dream, or gloriously fulfilling her destiny?

The cinematography is first rate, with many pans of the nomadic landscape, and artful focus and framing that help accentuate the story and characters. One scene, introducing Marta Becket’s sidekick friend, is a two minute vignette including slow motion that weaves music, an ostrich, and a four-by-four to establish his character. And what a character!

An intriguing documentary that had me fascinated from start to finish.

PS – from what I’ve read, Marta Becket still performs to this day. Now in her 80s though, the show is now limited to a 45-minute seated performance.