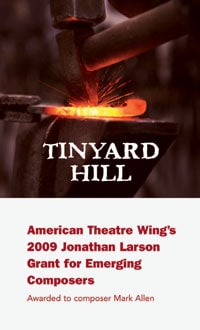 TheatreWorks kicks off its season at its Lucie Stern location in Palo Alto with the world premiere of Tinyard Hill, a country musical set in a small town in rural Georgia in 1964. The show also serves as the centerpiece of the 8th annual New Works Festival.

The idyllic summer in this small town and the dreams of David Kingsley (Chris Critelli), the son of the only blacksmith in town, are quickly altered by the growing conflict in Vietnam.

The stage setting and lighting of this production are superb. The opening scene starts with dramatic tall trees that are silhouetted against a warm blue lit backdrop. This set is a mechanical marvel as the looming trees actually move to convey relative movement of the characters below. Subsequently, four extremely detailed stage sets of the Kingsley’s blacksmith’s workshop, the home of Mary Bell Whitehead, the fair grounds and the motel move gracefully in and out of focus like a dance between different scenes and is fascinating to watch.

Listen to Clint and Loni discuss the show Tinyard Hill:

May Bell Whitehead (Allison Briner) delivers well-timed comedic lines with just the right amount of “Ladies Auxiliary Club” swagger that had the audience laughing in hysterics.

Aileen Garrett (Melissa WolfKlain), plays the bright-eyed engaged niece of May Bell from New York well with striking similarity to the princess roles of Anne Hathaway.

However, one of the most memorable moments belongs to Russell Kingsley (James Moye) with his dramatic monologue recounting his time in the war, the sacrifices he made the and losses he felt and how he vowed his son would not have to go through the same experience. It is a powerful scene and offers a glimpse into what the rest of the musical may lack.

The theme of the play is about change yet the musical conveys this more in action and words than in emotional impact. As the characters struggle with the way life has been for them in Tinyard Hill and the way life must be with the growing war, there is little emotional sense of the true conflict that each of the characters must be feeling. Because of this, the characters become more caricatures than real individuals with internal conflicts and depth.

Thus, as a warm, funny and entertaining evening of wonderfully catchy country-pop music and very likable characters, Tinyard Hill absolutely delivers. As a possible thoughtful piece on the complex emotional struggle of facing change, love and loss, it falls short. Yet, not every piece needs to be a “Boleros for the Disenchanted.”

Although the shadow of the looming war is not strongly conveyed, to be fair, there is plenty of chemistry between all four characters so the electricity of summer love is definitely felt.

Tinyard Hill’s world premiere at TheatreWorks will have you reminiscing about your own memories of summer love and the dreams and aspirations to become more.

The opening night reception gets a 5 out of 5 not only for the great actor engagement, food and wine, but also because it was clear to me that TheatreWorks is well-loved and supported by the community.

The biggest surprise is the quality and variety of the sets. Trees weave across the stage. Houses, lights and signs slide in and out and transform the story from a sweltering blacksmith shop to the swamps of Georgia with clever ease. Artistic details provide visual depth.

The lighting is also terrific. The intimate, 400-seat Lucie Stern Theatre in Palo Alto takes us into the sweaty, backwoods of Georgia with surprising realism.

The story itself is predictable; a pampered city girl meets the country boy who wants more in life. But it accomplishes exactly what it sets out to do: entertain. The acting and singing are strong enough, with only the slightest of opening night glitches here and there.

The country-pop element and Georgia setting give the show some energy and separate it from standard fare. Although we never get to the war (fortunately), Vietnam provides the only moments of tension and potential intrigue, without wading deep into politics. Tough decisions face the characters. Love. Family. Service. Patriotism. Maybe life in Tinyard Hill is not so simple after all.

The first act is no doubt stronger, despite running a tad long. Later, the songs at times don’t integrate quite as smoothly, and become maybe too Disney-like (happy duets, looking to the skies). Still, the ensemble numbers work, with effective harmonies, and plenty of pithy lines punctuating heartache and human falability.

In the end, Tinyard Hill is great family entertainment and recommended.

It’s great to see Artistc Director Robert Kelley (who, fresh out of Stanford, launched his first production ‘Popcorn’ in 1970) continue to receive recognition and support from the community. It’s quite a feat to have a 40 year run in anything, let alone the budget-challenged theater industry.

An exciting opening night for TheaterWorks. The Lucie Stern Theater is a picturesque setting to enjoy quality theater, and it looks to be a strong season.