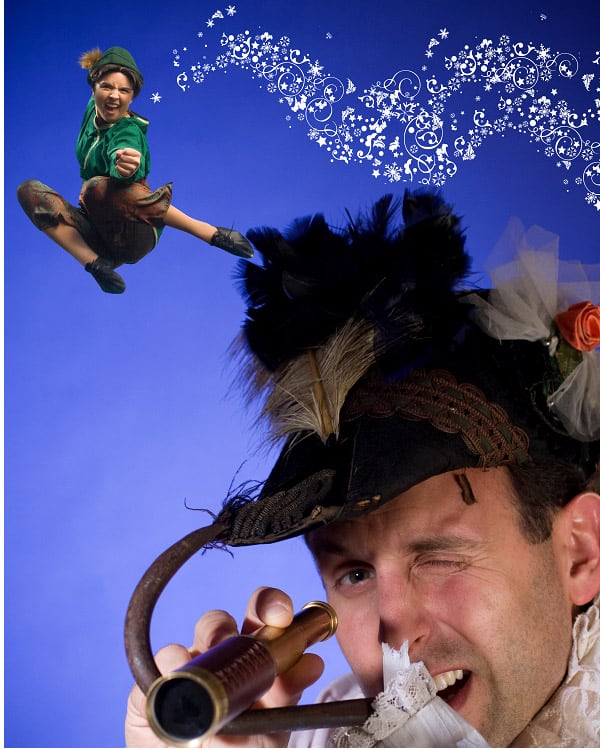 The moment I set eyes on the Ashby Stage for the Berkeley Playhouse presentation of ‘Peter Pan – The Musical’, I was intrigued. The building is hard to miss with its technicolor façade of cobalt blue, fiery orange and eye-popping yellow. The gentleman with a stylish hat collecting the tickets and “The Hook & Crook” refreshment sign with skull above that greeted us only heighten my imagination.

I felt like Alice in Wonderland going down the rabbit hole.

When I popped up on the other end, I was seated in a narrow theater that was stretched two stories tall. Around me were little people and for once, at 5′ 2″, I was not the shortest person in the room. Beside me a little person in a cute pink dress was licking a lollipop.
The opening scene is magical with a ballet number reminiscent of Cirque du Soleil in style. I knew at once that this was a different land where a little bit of fairy dust could make you fly. It conveyed the ambiance of the original story of Peter Pan through costume, acting and the live band behind the stage set.

The musical truly took flight when Peter Pan (Megan Barrow) flies through the window. Megan not only has strong vocals and the dexterity to give a solid performance while transcending gravity, but also captures the spirit of Peter Pan as the little boy who never wants to grow up. The performance is inspiring and believable. Megan is even able to breathe life into Tinkerbell so that at the point in the musical when Tinkerbell may die, the entire audience jumps in to participate and help Tinkerbell live.

The aerial dance in this musical is incredible. At one point in the show, there are four performers in the air and others dancing on the stage. The effect of this well-choreographed number is delightful and wondrous to watch.

Such scenes highlight the true strength of this musical which is the masterful integration of performers, costumes, stage set, music and dance to produce a cohesive musical that just works. The variety of music and dance style across the bands of pirates, Indians and little lost boys who fell out of their cradle kept the audience’s interest. A true challenge when half of the audience are children who can be bluntly honest and impatient.

Captain Hook (Gabriel Grilli) was also a highlight of the musical playing the lovable villain. The well-timed gestures, grandiose vocal intonations and facial expressions resulted in a visually magnetic performance.

However, it was not the individual performances of a few actors that made this musical truly great, it was the collective passions of the entire team which exuded from the thoughtfully designed stage set, the enthusiasm of every performer regardless of role and the desire to engage with the audience.

I enjoyed the ending. It was unexpected and after some contemplation, I was glad it had a twist… a slight change in mood.

‘Peter Pan’ the musical is the sun, moon and stars of Berkeley. It is the perfect musical to bring your children to and reminds us all of our inner child.

P.S. When you visit, do check out the showcase just before you enter the actual theater area. There are interesting facts posted about the Peter Pan story such as:

All of these elements come together in a stars-have-aligned kind of way for this special musical in Berkeley. Peter Pan is that good—Zelda dance moves and all.

From the opening scene in the home of the Darling family, to the climactic pirate ship plank walk and crocodile “chase”, this musical draws the audience in—adults and children alike. Two-and-a-half hours dissipate in the blink of an eye.

It’s hard not to smile. The actors savor every moment.

Each song is an energetic, even at times Cirque du Soleil-like extravaganza. All this on the intimate and narrow Ashby Stage (Berkeley).

I loved every second of it.

Peter Pan – The Musical
Berkeley Playhouse
Ashby Stage located at 1901 Ashby Avenue in Berkeley, California
Tickets being at $22 each. Thursday is “Pay What You Can” Night
Performances from July 17 – August 23, 2009