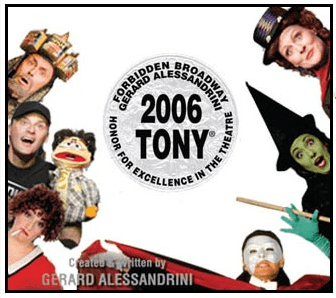 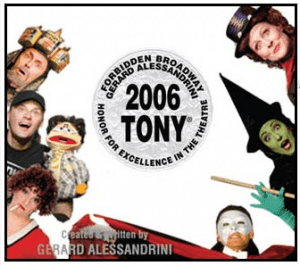 The heat gets turned up as Forbidden Broadway takes the audience on a roller coaster through twenty-five acts and countless jabs (some sharper than others) at Broadway classics. The most wicked of barbs are directed at Disney, although Andrew Lloyd Webber also got quite a tan from the broiler with a naughty naked number and soaring lyrics claiming he “sleeps with everyone”.

The introduction started off a bit weak, but quickly picked up momentum.

Some of the highlights include “Belittled Mermaid”, “Mary Poppins” and her oscillating lips, “Lion King”, “Fiddler” and “Cats”.

In general, I thought the acts in the second half were stronger. “Lion King”, the opening act after intermission, was one of my favorites as it had Seinfield-like humor around the painful strain of wearing some of the elaborate and even ostentatious costumes with laments of “Can you feel the pain tonight… ?”

I thought the most creative and funny acts were the ones that provided an insiders look from the actors’ perspective into the life of acting and Broadway. The “Cats” and “Fiddler” acts played off this perspective. However, there is a fine balance between insider jokes that bring you in for a good chuckle and those jabs that  are so “insider”, they left me feeling like an outsider. I could almost imagine the script for this musical being written after a bunch of actors came together, having completed a long day of work, many bottles of wine later and “Voila!”.

Other acts such “Cameron McIntosh: My Souvenir Things” were funny, but a bit cliché. And of course, how can you not have an appearance by the Phantom of the Opera himself?

With a very simple stage set, a pre-defined slew of jokes, the onus weighs heavily on the four performers and one piano player to pull the audience along. This is a musical that is difficult to cast as each of the performers need to play a host of characters. In some acts, they shone, in others the humor did not quite click. Gina Kreiezmar shone as Mary Poppins and Jeanne Montano lit up as the “Belittled Mermaid”, but lost some luster as Sarah Brightman.

I also think a stage configuration like the San Jose Stage Company in which the audience and actors are on the same level would provide an intimate setting more suitable for the nature of this production. The height of the stage does get used as a prop for some slap stick humor, but in the end, I thought it was more a hindrance to audience interaction.

And so, like a roller coaster, Forbidden Broadway at the San Jose Repertory Theatre has its ups and down. Fortunately, like the rotating turntable on the set of Les Miz, it doesn’t take long before one act leaves and another is rotated in to provide the laughs.

Clint says:
With Forbidden Broadway, there is no doubt about what you’re in for: biting satire of Broadway past and present, set to simple, up-beat piano music. This is not about deep meaning, or revelations, or even anything beyond slap stick comedic moments. And that’s exactly what you get. For the most part it delivers. But the results are uneven.

The good news is the show is fast paced, and typically moves from one short satirical musical number to the next at breakneck speed. So, if something—like Carol Channing’s super-impressive lipstick—doesn’t get you laughing, there is another Broadway spoof just around the corner.

My big issue with this touring version of the Tony award-winning (2006) New York production is the material itself. It’s mostly flat, tired and often repetitive. A loopy Liza Minelli impersonation (done well) doesn’t offer anything new. And yes, we get the point, Broadway is going through a Disnification of hellish proportions – “I remember when actors played humans” says a disenchanted pussy tail wielding actor (William Selby) from Cats.

There was a time when these lines and parodies were fresh. But now, it all seems overwrought.

The four actors are impressive, and generally give convincing performances. Their favorites are obvious though, and on occasion you get the sense they are dialing-it-in. Again, despite their overall efforts, they can’t rise above the material.

Still, there are several hysterical moments. One of my favorites was the Mary Poppins number, when Gina Kreiezmar uses her quivering upper lip in über precision while belting out Julie Andrews with narry a worry in the world. Also, the bored, clock-watching extra from Les Miserables making backstage calls on her iPhone to actors in other shows was a hoot… “What, you’re in Act 2! We’re still only in Act 1…”

For this show, The San Jose Rep offers “cabaret” seating—4 chairs with a table set adjacent to the front of the stage with wine—which makes for an intimate atmosphere, and helps create that New York, nightclub-like feeling the original show established. It’s a novel and fun way to watch Forbidden Broadway. Just watch out for a meandering Liza Minelli. You many find yourself unwittingly part of the show.

At 90 minutes, it was over in a snap. The intermission was perhaps unnecessary.

Bottom line: when the satire works, it works well. But for the most part, it’s a scatter-gram of cliches, well-worn in-jokes, and tired wise-cracking show tunes. All of a sudden, Disney and Andrew Lloyd Webber don’t look so bad.

PS – Where was the Mamma Mia shtick, or did I miss something?